After a year of silence, chief archaeologist of the tomb site, Katerina Peristeri, revealed the secret of Amphipolis and the mysterious dead in Northern Greece.

”We surmise it was a funerary heroon (hero worship shrine) dedicated to Hephaestion,”  Peristeri told reporters on Wednsday, adding however: “I do not know if he is buried inside.”

Hephaestion was a Macedonian nobleman born around 356 BC, a general in the army of Alexander the Great and a the close companion of him.

Despite the absence of evidence confirm that Hephaestion was buried in the magnificent tomb, Peristeri revealed that three inscriptions with the word ‘parelavon’ (received) and Hephaestion’s monogramme were found. 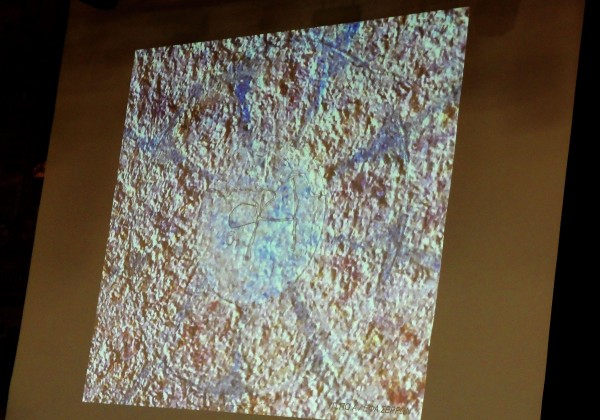 The inscriptions about 25 cm in height have the signature ANT and the the word “parelavon” carved as wells as a group of letters forming the name of Hephaestion. The signature ANT was used by all the members of the Antigonid dynasty. Here it is attributed to Antigonus the One-Eyed (382-301 BC). The interpretation of the  inscriptions is  given as “I, Antigonus, I received building material for the erection of a monument in honor of Hephaestion.”

According to ancient sources, Hephaestion died suddenly at the age of 32 due to fever in Ecbatana, Iran. His body was cremated and his ashes were taken to Babylon. Citing ancient historian Plutarch, Peristeri said  “Alexander asked (his architect) Deinokrates to erect shrines all over the country.”

So, is the Amphipolis tomb a shrine dedicated to Hephaestion without the remains of the noble dead inside?

The tomb at Amphipolis, some 60 kilometres (37 miles) from the northern city of Serres, is the largest ever discovered in Greece. It was dug up in 2012 and opened in summer 2014 amid speculation that it was built for someone close to Alexander like his mother Olympias or wife Roxana or even for Alexander the Great.

Detailed excavations have failed to far to give conclusive answers about the prominent dead. The remains of an elderly woman were found also the bones of two men and a newborn baby as wells as of animals including a horse.

Peristeri’s findings have been called into question by other archaeologists who claim the tomb was built under the Romans, not the Macedonians.

However, Peristeri insists the complex was built in the final quarter of the fourth century BC (325-300 BC)and was used until Roman times.

The tomb, measuring 500 metres in circumference and dug into a 30-metre hill — was found to contain sculptures of sphinxes and caryatids, intricate mosaics and coins featuring the face of Alexander the Great. Built on the banks of the river Strymon, Amphipolis was an important city of the ancient Macedonian kingdom under Alexander.

PEristeri’s revelations were met with reservation by other archaeologists. One archaeologist who was not involved in the excavation, rejected her claims as “totally unfounded.”

Panayiotis Faklaris, associate professor at the University of Thessaloniki, told the Associated Press the tomb more likely belonged to some prominent ancient citizen of Amphipolis.

“There is no historic or scientific basis” for what Peristeri claimed, he said. “Hephaestion had no connection with Amphipolis.”

Archaeology professor at the Aristotle University of Thessaloniki Chrysa Paliadeli told Skai TV that Peristeri’s revelations were “interesting” and that the Hephaestion-scenario “coincides in time.”

According to Associated Press, “The discovery caused controversy from the outset. Other experts criticized Peristeri for digging too fast and creating unjustified expectations that the tomb was unplundered.”

Despite the revelations, the Amphipolis tomb still keeps its secrets deep inside and the mystery remains.

More on Hephaestion
PS Odd is that Peristeri’s press conference at the Thessaloniki University on Wednesday and her latest findings were not uploaded on the website of the Greek Culture Ministry as of Thursday noon. So, I assume that Katerina Peristeri is in a kind of “disgrace” by the culture authorities as she was blamed for playing the game of ex PM Samaras who was trying to exploit the Amphipolis excavations for political and national purposes and he was pushing the archaeologists involved for for ‘groundbreaking’ results.