All signs show in one direction: pensions cuts. But whether the cuts will affect only pensions above €1,000 or go deeper and affect pensions of €800 is not clear yet. Fact is that the Draft Budget 2016 has a “hole” of €741 million that has to be filled. And the pensions pool is been offered like a present on the table of the Greek government. the cuts have been indirectly announced by Labor Minister Giorgos Katrougalos on Wednesday, when he told reporters after a meeting with the Prime Minister and the Wise Men Committee for the Social Security Reform that “the knife will eventually cut pensions below €1,500″ and argued that the Government will take all possible steps to avoid decreases for pensions of €1,000 consisting of main and supplementary pension. These upcoming cuts have to do with the Budget needs and have nothing to so with the also upcoming ‘social security reform” about which I will write in the future, when more accurate information is in.

It looks as if the measure will hit the so-called “pensions of the noble social security funds” like those of public utilities (Public Power Company, telecommunications OTE, water company) as well the pensions received by former employees at the banks, media and public sector as well as pensions of lawyers, doctors and engineers.

For certain categories, that is for high pensions that exceed €2,000 the cuts are expected to be higher.

As you probably guessed correctly, the higher pensions are given by the Public sector for the former civil servants, with many of them to have retired around 50-55 with 25 years of work and a pension that is almost as high as their salary was. One trick civil servants do is to work in lower grade positions in order to avoid transfer in other services or even relocation and then short before the retirement they claim their right for promotion. The promotion is granted, the salary is increased, it is normally too short-term for new transfer or assignment, the lucky civil servant goes in early retirement with his pension calculated on his latest salary.

Graph —> Distribution of expenditure for main pensions for 2,020,852 pensioners & retirees: 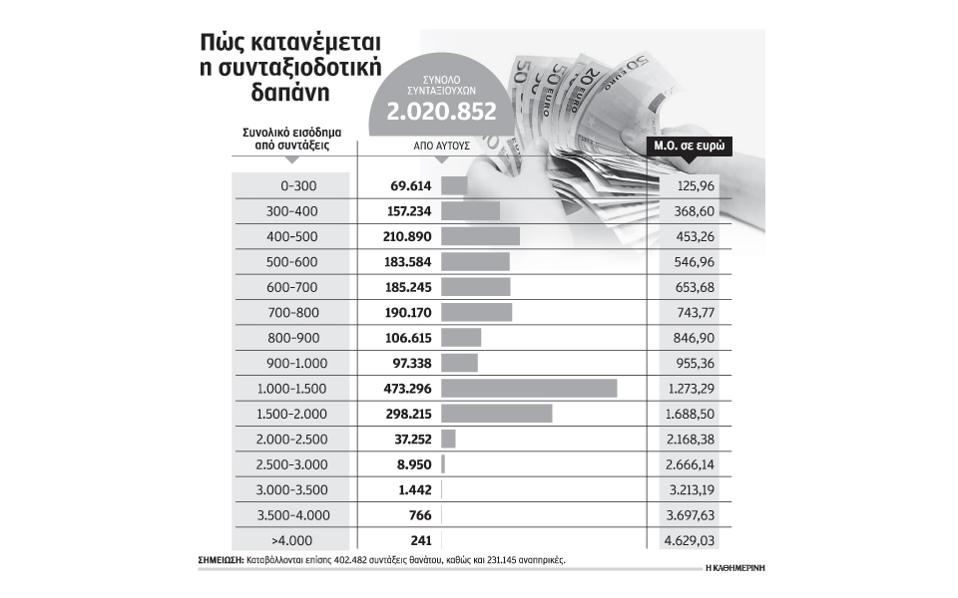 Of course, there are pensioners who receive more than one main pension as well as supplementary pensions. This occurs when a pensioner changed working sector in during his working life and also paid additional social contributions to the funds of his working sector.

Nevertheless, it will still take a while until the pension cuts are official. Last week I heard in the media, that the pensions cuts will be calculated based on the pensions people received before the cuts of 2011 and 2012. This is, certainly, unfair, but the lenders rule.

My cat commented that the pension cuts delay aims to give time to ‘noble funds pensioners’ to lobby for their noble causes like limiting the cuts as much as possible.

She further commented that it is odd and unfair that there are highly educated young people work full time for 480 euro per month, while there are basic education workers who went into early retirement at their 50’s and get pensions of 2,000+ euro just because they were working in Greek utility companies.

While we were chatting about the topic and she was getting more and more angry, she also reckoned those civil servants who went into retirement with 15 years of service at the age of 35-38, and those “unmarried daughters of civil servants and members of armed forces members, or utility personnel etc” who receive the pensions of their parents even when they are adults and have a full time work and salary.

But you know, my cat is mean. A four-legged creature full of envy. So trying to explain “Greek unionism & lobby & politics” to a cat is impossible. And furthermore, she is not even Greek.

PS I remember that when the Samaras government was planning to cut pensions last year, the talk was that the measure should affect pensions below 1,000 euro arguing that they were making the majority of expenditure. I also remember previous government – yet under the austerity bailout program – charts claiming that the average pension in Greece was 900 euro per month.

I don’t know where these charts and information comes from and how valid they are. And not even my cat has an answer to this. The Greek pensions problem is a notorious one and I am not sure that the social insurance reform will solve it especially when unemployment is still at 25+% and the funds suffer under immense shortage of contributions.

At least, the SYRIZA-ANEL coalition will not cut the pensions below 1,000 euro. “Social justice” that is 🙂

BTW: For newbies on Greek pensions system, an interesting read here, even though from 2011.