The dignitaries who arrived at the airport early in the morning to wave Goodbye were almost as much as the passengers. Prime Minister Alexis Tsipras, European Parliament President Martin Schulz, EU Commissioner for Migration Dimitris Avramopoulos, Foreign Minister of Luxembourg Jean Asselborn, Greek Minister for Migration Yannis Mousalas. If one adds the crowd of their assistants, translators, secretaries and security guards, the members of the official Farewell Committee were as as many as the refugees flying from Athens to Luxembourg. 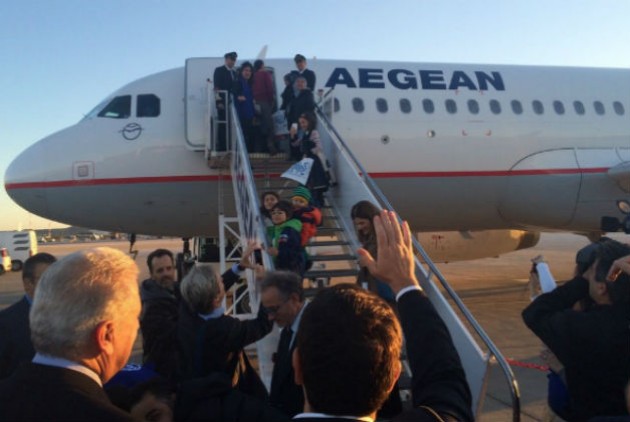 The lucky refugees were two families from Iraq and four from Syria. A total of 30 people. Among them a pregnant woman and two children with disabilities. The chosen ones were part of the EU decision for “refugees allocation from Greece”. Luxembourg had generously offered to accept a total of 181 refugees.

The families were temporary living in the refugee camp of Elaionas in Athens. They have arrived to the Greek capital last week form the island of Lesvos. Their selection was based on criteria of “vulnerability” in cooperation of the United Nations High Commissioner and the European Asylum Agency.

When the refugees arrive in Luxembourg they will stay in special housing for 48 hours. When their files will be examined, the group will be accommodated in fully equipped homes, their food needs will be covered and will enjoy the assistance of social services.

“The ceremony at Eleftherios Venizelos airport in Athens had substantial and symbolic character, ” Greek media note. “Substantial because the relocation of the 30 refugees had followed the decision of the European Council for the priority relocation of vulnerable refugees. And symbolic because it sent the message of the need for faster and bolder mobilization of the European Union in terms of solidarity and humanism.”

All the Very Important Persons made the necessary statements with PM Tsipras wishing the refugees to have a “nice trip in the hope of a better life“. He stressed that “We are fully aware that in front of thousand of refugees the 30 are just a drop in the ocean,” and he added “However, we seek to turn this drop into a stream and then into a river of humanity and shared responsibility.”

Then they all gathered around some refugee kids and cameras captured the historical moment of EU’s ‘shared responsibility’. 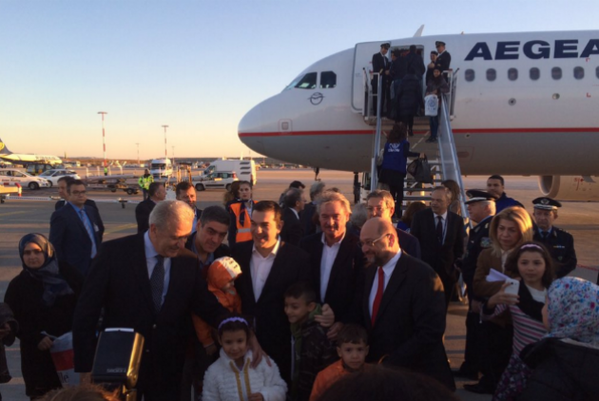 Together with PM Tsipras, the EU dignitaries will travel to Lesvos to check the situation. Nice.

According to September decision of EU Interior Ministers, small but rich Luxembourg, the country of European Commission President Jean-Claude Juncker, will a accept a total of 181 refugees from Greece and 56 from Italy. Yet not all fairy tales have EU’s happy ending. Three children and two men were drowned yesterday off the island of Lesvos. 65 people were rescued. For a change, nobody has been missing.

PS Yes. The EU is trying. Hard. And slow. Very very slow. I guess, by 2020 or something the EU will have agreed on how to solve the Migration & Refugees problem.

I could also be mean and claim that the cost for all the EU VIPs to travel, sleep, eat, drink and go around in could have been given instead to cover one of the urgent needs for refugees: SHOES! But I am not mean, so I don’t write anything like that.