Jeering, tear gas, sound flares, water bottles and oranges were the highlights of the farmers’ protest outside the Greek Parliament at Syntagma Square on Wednesday. More than 3,500 farmers, breeders and fishermen from all over Greece had gathered in Athens to protest taxation and social security reforms in their sector.

Tension went high short after 12 o’clock noon, when a farmers’ delegation tried to break the police ‘fence’ consisting of several police vehicles. and enter the Parliament in order to submit a protest resolution. 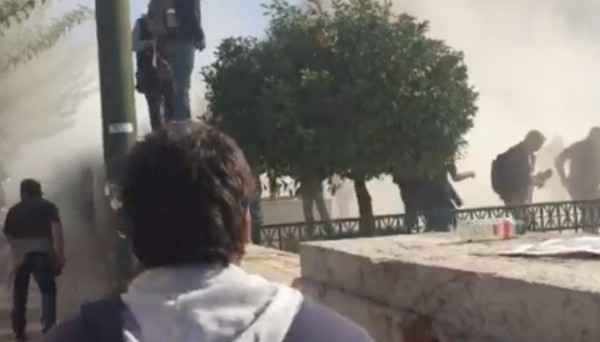 When the farmers entered the parliament yard, police repelled them with teargas, the farmers picked up bitter oranges from the decorative trees outside the parliament and started to throw them at their “attackers”. Water bottles flew through the air as well.

Video: police – farmers clash. Somebody shouts “Heads!” apparently urging others to lower their heads for protection.

Within 10 minutes, a thick cloud of chemicals had covered the area, suffocating protesters and passersby like men, women, children and seniors, in one of the most vibrant spots of daily life in Athens.

Farmers threaten with further actions stressing that the upcoming overtaxation and the changes in  the social security will affect the country’s primary production and crash those who sole income comes from farming, breeding and fishing.

It was the first massive farmers’ protest after several years, the men and women had arrived from across the country with buses and ferries.