Greek Culture Minister Aristidis Baltas made a shocking revelation: that Greece will not claim back the Parthenon Marbles from United Kingdom because the government believed that it had no chance to win the legal battle.  Speaking at the Parliament on Tuesday Baltas replied to a question about the Ministry’s moves for the return of the stolen Marbles with

“The tendency is to not move towards legal claims mainly because we risk losing in the relevant court.”

It is the first time that a Greek Minister of Culture openly admits that a court decision on the Return of the Parthenon Marbles would be in favor of the Britons. Interesting enough, Baltas made the statement during a meeting of the Cultural and Education Affairs Parliamentary Committee preparing a bill related to the Return of Cultural Goods unlawfully removed from the soil of a state- EU member country.

According to Greek media, the legal claim of the Parthenon Marbles has already being abandoned by the first Syriza-ANEL government, but that then Minister Nikos Xidakis was more cautious in making statements regarding the position of Greece on the issue.

In October 2014, then Greek Culture Minister Kostas Tasoulas (New Democracy) has assigned a big law firm in London to assist Greece in the issue. Attorney at the law firm, Amal Alamuddin, the faboulous wife of George Clooney had visited Athens and cheered everyone with her charm and fine style. 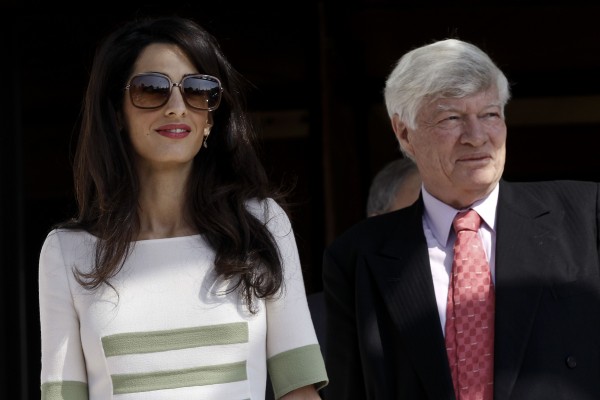 The cost for the law firm expenses, 200,000 British Pounds was reportedly contributed by a rich diaspora Greek.

Tasoulas commented angrily on Baltas’ statement saying that what Baltas said was “unheard and unacceptable” not only because in enhances the unsupported arguments of the Britons but also because it presupposes something for which Greece has a lot of arguments in favor of its position.

But apparently, it does not.

I don’t know exactly what was the legal advise of the London firm but the involvement of  Alamuddin gave certainly a great publicity. Also George Clooney spoke openly in favor of the Return of the Parthenon Marbles to Greece and joined the campaign.

The Parthenon Marbles – or the Elgin Marbles– are a collection of Classical Greek marble sculptures (made mostly by Greek sculptor Phidias and his assistants), inscriptions and architectural pieces that were originally part of the temple of the Parthenon and other buildings on the Acropolis of Athens. Thomas Bruce, 7th Earl of Elgin claimed to obtain in 1801 a controversial permit from the Ottoman Sultan who ruled Greece at that time. The collection of the stolen Marbles is exhibited in the British Museum.

I assume, the case is legally “dead and buried.”

PS As George Clooney used to say in that Campari Ad: ‘No Alamoudin, No party.’ And No return of the Parthenon Marbles to Greece.