Portuguese and Syrian volunteers in Athens to help refugees

Portuguese and Syrian volunteers are currently in Athens offering a helping hand to refugees and migrants trapped in the ice-cold Greek capital. The six volunteers flew from Lisbon to Athens right after Christmas and landed in an ice-cold city with hundreds of people sleeping outdoors.

The article was submitted by KTG-reader Bernardo from Portugal:

“As governments don’t act quickly enough, citizens like those belonging to the association Coragem Disponível (Available Courage) feel they can’t wait any more. Six volunteers are going to help in a field and in the streets of the Greek capital.

“We first thought of going to the islands, but then we realized that in the islands there were already several associations and everything was more organized. On the islands remain only the undocumented people, the rest of the refugees are brought to Athens and they lack help in the field. There are even donations but no people to distribute them,” explains Helena Castro, a former journalist and one of the association directors.

On the other side, since the Former Republic of Macedonia started barring at their boundaries all refugees that aren’t either from Syria, Irak or Afghanistan, “the Greek police started sending these people to Athens, which has received, all of a sudden, some 3,000 people more.”

The plan of this mission is to offer help in a camp that provisionally offers shelter to refugees; a open air hockey field. “It’s a recently set camp and it’s not yet organized. We will do what is needed: cleaning, cooking, anything,” said Helena.

KTG note: huge tents have been set in the hockey field

It’s a very bad time for refugees and migrants to be in the streets of Athens. Temperature dropped dramatically in the last 12 hours and snow is expected as of tomorrow, Thursday. While Greek authorities and municipalities offer them shelter in either in the refugee camp of Elaionas or in the old airport, and there are some 200 vouchers for hotel accomodation many of them prefer to stay downtown in order to find ways and leave Greece as soon as possible. 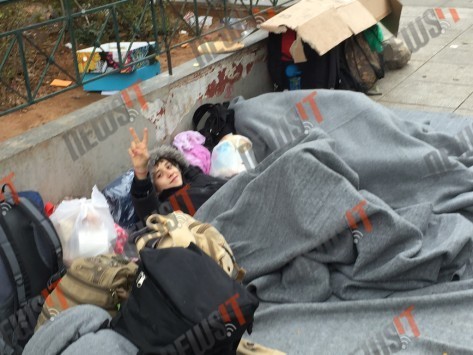 Local and foreign volunteers hand out food and water

Men, women and children spent the cold night around Victoria Square in downtown Athens. While buses were awaiting to take them to Elaionas camp, the majority of them refused to make use of the municipality transport, claiming they had tickets to continue their way to Central Europe in the afternoon.

More than 3,000 people arrive from the islands on a daily basis. More than 3,000 are migrants trapped in Athens as the EU refuses to accept people from countries other than Syria, Iraq and Afghanistan.

It looks that those refugees from Afghanistan are too poor to buy tickets to continue their path for a better future and they are stuck in Athens as well.

PS at 7 pm, temperature is at 7 degrees Celsius and the wind is blowing from the North-East.  An hour earlier, I saw a homeless Greek in our neighborhood. the first one I saw around our home. He was under a mountain of blankets and carton sheets.