Conspiracy theories: Hitler faked his death and escaped via Greece

A team of former CIA investigators uncover secret FBI files to ‘reveal’ exactly what happened to Adolf Hitler. Using a collection of never-before-seen documents, the team claim to have proof Hitler did not kill himself in his underground bunker at the end of the Second World War. Instead, the investigators believe Hitler faked his own death and he escape to the Canary Islands via … Greece. 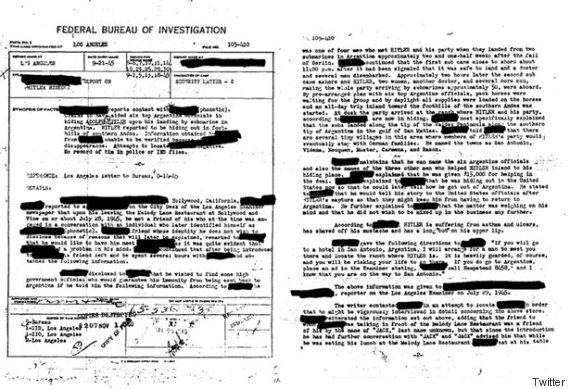 Hitler was allegedly hiding in a monastery on the island of Samos for some time, claimed a Greek construction worker …

“Interviewing an alleged witness to Hitler’s escape Mr Cencich speaks to a former construction worker who claims to have seen Hitler in May 1945, days after he supposedly died in Berlin.

The Greek man tells Mr Cencich: “In 1945 I was building a secret construction inside the monastery in Samos.

“I had to build secret tunnels and compartments for Germans. Yes, the Germans were Nazis and one of these guys was Adolf Hitler.

“He was right there, he wasn’t wearing a moustache or anything. this was May 1945. I realised it was really Hitler because of the airplane.

“I went to work in another town. The first thing I saw in this town was a German airplane. It had landed in an old potato field. the farmer told me there were five people who landed, they were German.”

From there it is believed Hitler travelled by U-Boat to Argentina to be reunited with his Nazi comrades. (full story in Express.UK)

It is not clear when John Cencich interview the Greek eyewitness who could have been in his early 20’s in 1945.

I have no idea whether the Greek constructor had made his claims public also earlier or if there is one monastery in Samos with tunnels and secret rooms, hiding Hitler’s fingerprints and/or DNA samples or something..

PS no offense to my 90-year-old readers.