It was back in November 2013 when the European Commission warned Greece and Bulgaria to stop turning down Syrian refugees at their land/river borders with Turkey, after the UN issued a similar call just a few days before. Two and a half years later, in January 2016, it is Belgium, the country that totally failed in terms of terror surveillance and prevention (Molenbeek, Paris), that asks Greece to push-back refugees and thus in the sea.

“The Belgian interior minister told us to push refugees back to the sea,” Greek Migration Minister Yiannis Mouzalas told Newsnight program on BBC on Wednesday. Speaking about the EU interior ministers meeting beginning of the week, Mouzalas revealed further that Belgian Jan Jambon urged Greece to get rid of refugees and migrants in any way saying: “Be illegal! We are scared! We don’t care if they’re drowned!”

“Fortunately, none of the other interior ministers adopted the Belgian proposal,” Mouzalas added.

Germany, Belgium, Austria and some other arch-conservative EU countries have been putting extreme pressure on Greece to ‘control its sea borders to Turkey’ and even threaten to expel Greece from the Schengen area, even thought this is legally and politically extreme controversial. 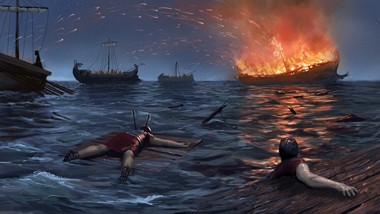 Is this the EU’s vision of how Greece should protect the union’s external borders?

However, none of these countries has a specific plan or proposal on how to control the sea borders that extend to several hundreds of kilometers. Oh, the EU Commission and Germany do indeed have this weird idea of “Greek – Turkish joint patrols” but as Ankara has not given up its claims on Greek islands and Greece’s territorial waters, this EU plan is never going to happen.

Of course, making Greece into the EU’s scapegoat is the easy blame game for EU and EU-member states politicians hiding behind their desks, scared to lose political power and obliged to fulfill their voters demands, voters who the politicians have seduced with their populist rhetoric. Among them are also some politicians, like the Austrian interior minister who has never managed to go off shore maximum 10 meters, maybe during a summer swim & fun holiday in Greece .

Euractive.com: EU Commission warning in 2013  – Thanks to @ByzantineJustice to reminding.