it was short around one o’ clock Thursday noon, when a raging crowd of some 60 people wearing hoods started to hurl molotov cocktail bombs at riot police squads around the Syntagma Square in downtown Athens during the big protest march against the pensions reform.

Within minutes the raging crowd of the so-called “anti-authoritarians” turned the the area into a battle field: they broke shops windows with stones, they set fires and they reportedly even beat a journalist covering the demonstration. 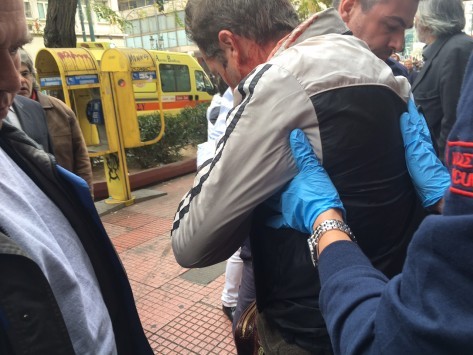 As expected, the police fired a rain of teargas, and the otherwise peaceful march of public and private unions protesting the Pensions Reform was dispersed. 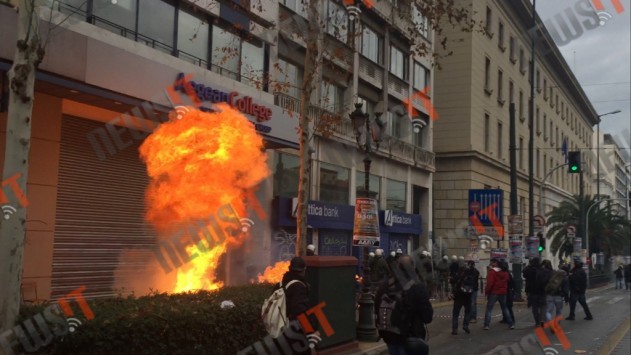 A bit earlier in Thessaloniki, people with hoods carrying clubs brawled with  protesters when the latter stated to shout at them “Take the hood off!” One protester has been injured in the head.

The atmosphere in Thessaloniki was really tense with anti-pensions-reform protesters chanting that they will move to Bulgaria, where taxation is much lower than in Greece. On protester reportedly attempted to enter the Ministry of Macedonia-Thrace with his vehicle, a semi-truck.

Thousands of people from all professions across the country joined the 24-hour strike against the pensions-reform, the additional cuts of pensions and the social security contributions hikes. 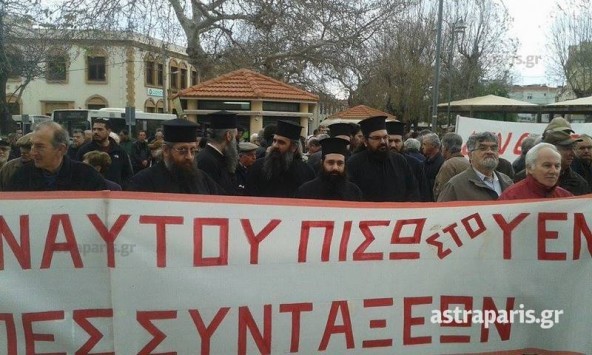 Public sector employees, private sector workers, self-employed and freelancers, customs personnel, but also retailers, bakers, and even funeral office workers closed their shops and offices and joined the biggest and broader general strike that paralyzed the country. Post offices and some banks remained closed, all public services and municipalities too, petrol stations. Public transport means are operating only for a couple of hours, ferries are docked in the ports, taxis are parked in the garage, flights have been cancelled in 34 regional airports.

The point is not to count who is on strike but who is not.

Private sector union GSEE banner in Chinese! “The port is not for sale!” Port of Piraeus sold to Chinese Cosco. 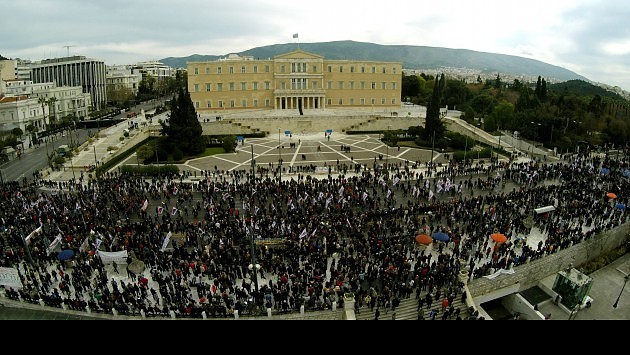 Protest march – Syntagma Square – Outside the Greek Parliament – Before the incidents.

According to estimations protesters in Athens were 50,000 people.

It was the first time since 2010, that the strike was joined by so many different professionals. In downtown Athens, only a few shops were open. In some areas and cities, also cafeterias and kioks were closed.

There is strong riot police presence around the Parliament and the Hilton Hotel, where the creditors’ representatives negotiate with Greek officials on the terms & conditions of program review, budget holes, taxes and pension reforms. According to media information, the creditors want the National Pension to be below 384 euro gross and to be given according to “income criteria” and after at least 20 years of insured work and not 15 as it is currently.

No wonder, the anti-authoritarians raged. It is the no future generation of Greece that will most likely will never manage to get a pension. One in two young Greeks below 25 is still without a job. And one gets a job it is “black labor” without social security, mostly part-time and for 200-250 euro per month. Not that they were not staging riots in the anti-austerity protests in 2010-2014, with the effect that they were causing the disperse of most of the anti-austerity protests.

Video: according to latest information, the riots continue in the area around the Athens University towards Exarxia.

State ERT TV reported at 3 o’clock news that rioters hurled molotov cocktails against the offices of PASOK. Riots are continuing around Omonoia Square and anti-authoritarians to have raised barricades with garbage bins.

What was interesting to observe was for one more time was that while the several unions and parties like Communist KKE have a joint anti-austerity goal, they don’t mingle with each other but they hold their on protest marches separately. So do not expect Greeks to unite for a common goal. The petty interests and the ideological discrepancies are too far away from each other. Many unions are affiliate with political parties also with those that voted in favor of the third MoU in summer 2015.

Ruling party SYRIZA has also called for support of the strike. But I don’t think it joined the march as a party block with banners etc.