Turkey blackmailed EU: either €3bn per year & EU accession or we send buses full with refugees to Europe

In internal EU memo obtained by Greek media reveals the blatant Turkish blackmail on the refugee crisis. The memo contains a summary of the dialogue between Turkish President Recep Tayyip Erdogan with European Commissioner Jean Claude Juncker and President of the European Council Donald Tusk on 16th November 2015 during the G20 Summit in Antalya, Turkey. The three Presidents were discussing the Action Plan to tackle the Refugees and Migrants Crisis.

According to the memo, the bargain was hard and Turkey demanded 30 billion euro from the European Union in order to refrain from sending refugees and migrants to Europe through Greece.

In addition, Ankara threatened, that if the EU does not link the refugee issue to Turkey’s EU accession then it would:

1. Send buses full of refugees to Europe via Greece and Bulgaria and will let 10,000-15,000 refugees drown on its shores.

2. Turkey does not accept the 3 billion euro for two years he had agreed with and wants 3 billion a year at least, otherwise there will be no agreement.

3. Requests opening all accession funds soon and non instructions from the European Commission.

4. The European Commission deliberately delayed the publication of Turkey’s progress report, at the same Erdogan’s request to help him win the election.

Overwhelmed with arrogance Erdogan complains that the EU treated Turkey like a fool for 53 years and did not allow it to become full EU member, he compares a country like Luxembourg with the size of small Turkish town.

The three-party meeting ended without an agreement.

What is worth noting is that neither Juncker, nor Tusk informed the other EU-member states about Turkey’s approach. Also the media covering the G20 summit were apparently told that “the ball was rolling”. but in fact there was a total media blackout on the EU-Turkey negotiations.

And at the end of the EU-Turkey agreement and Action Plan …what? The EU is expected to start pouring to Turkey -as it seems – part of the 3 billion euro as of end of February or beginning of March.

All we can do is to wait and see how Ankara will deal with the refugees and migrants.

I suppose, the EU leaked this internal memo to the Greek media, after Turkey complained that it has not received any more yet. 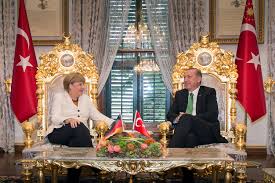 Turkey claims it has spent 8 billion USD to host 2.2 million Syrian refugees. A Greek taxman would ask proof with receipts… Blinded by Erdogan’s sparkling golden trhone, German Chancellor Angela Merkel is in turkey today and will meet with PM Davutoglu.

Official EU statement on EU-Turkey Agreement 29. Nov 2015 here. As we all know meanwhile, official statements tell half the truth. The other half is been revealed little by little. That’s why there is no transparency which time frame these 3 billion euro cover.

PS I also suppose that Erdogan’s mind is stuck at the old US aid formula and (Truman Dogma) for Turkey and Greece. And he believes that Brussels operates in the same geopolitical way. But the red danger is gone and there is no Communist Russia anymore so that Turkey & Greece will need protection from.