The European Commission has allegedly prepared a Draft proposal that the EU leaders will be called to sign tomorrow Monday in Brussels. “The European Union leaders plan to officially announce the Closure of the Balkan Route for refugees and the internal borders of Schengen for economic migrants.” According to an exclusive story published by Austrian newspaper Der Standard, that has reportedly obtained a copy of the Conclusions Draft prepared by the European Commission, “the immediate end of the migrants’  flow and the waving from Greece to Germany is top priority of the EU policy.” And this will be decided and announced at the extraordinary EU-Turkey Summit on Refugee Crisis in Brussels tomorrow Monday.

The draft also confirms the 700 million euro assistance, although in the September 22nd 2015 decision, the amount was 780 million euro.

However, the most touching paragraph of the draft is, of course, the following:

The EU leaders will “do the maximum to assist Greece in this difficult moment.” It is about “a collective responsibility of the community, which requires fast and efficient mobilization of all available resources”, but “also the contributions of the Member States.”

On March 2nd, Greek Migration Minister Yannis Mouzalas said that “the border to FYROM is considered as closed and that the thousands of refugees would stay in Greece for 2-3 years. As this statement shocked the Greeks, he revised it next day, claiming that “it was misinterpreted.” 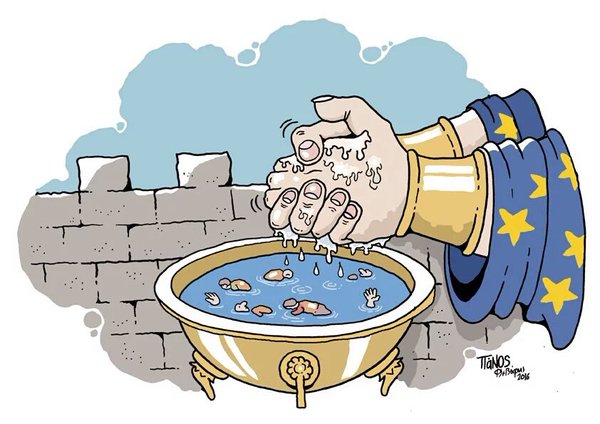 Ok, normally, the Drafts leave some space for ‘negotiations’ before they finalize and approval by 28 member states is needed. After a consensus has been reached between the SYRIZA-ANEL government and the opposition leaders from New Democracy, PASOK and Potami on Friday, Prime Minister Alexis Tsipras will fly to Brussels demanding “sanctions against those countries that do not implement the EU decisions on the Refugee Crisis.

BTW: I see, the Draft does not mention “Dublin amendment” and the fate of the refugees in Greece is very vaguely mentioned as ‘relocation’ that it has to be implemented” – should I worry?

PS KTG has been saying this all the time: the EC should cut EU Structural Funds to those EU members that sign Summit Resolutions but refuse to do their share in responsibility and take in the Refugees they should.