We had seen it coming. That the NATO involvement in the Aegean would trigger anew Ankara’s appetite to bring back the focus on the so-called “Grey Zones in the Aegean”. And indeed. During the heated NATO talks last month about the deployment of the SNMG2 force aiming to stem the flow of refugees, the Turkish representative at the military Committee submitted a document demanding among others that

The NATO does not refer to 16 small Greek islets in the Aegean with [their Greek] names but with numbers!!!

According to daily Kathimerini that obtained the confidential 17-point document, Turkey demanded:

The document was submitted by General Ethem Buyukisik.

“It was the first time that had Turkey disputed Greek sovereignty via an official NATO document,” Kathimerini stresses adding that the NATO Militares rejected the Turkish request. 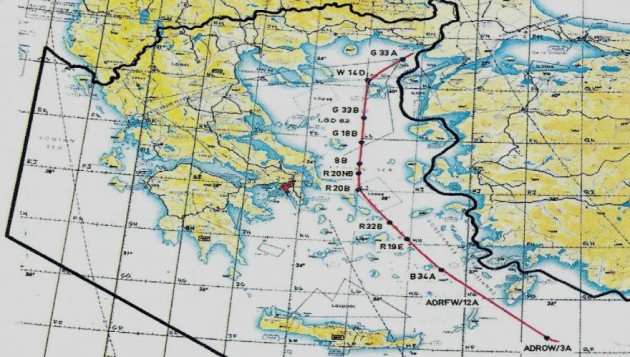 Red Line shows Turkey’s expansion lust. I remember some years ago, a Turkish Defense Minister had claimed “he wanted more space in the Aegean in order to have enough place for swimming.” – My Horse, for a Turk who can swim more than 3 nautical miles.

On Friday, during a joint press conference with Greek Foreign Minister Nikos Kotzias in Athens, Turkish FM Mevlut Cavusoglu openly challenged the Greek sovereignty in the Aegean and claimed:

“It makes no difference who is the owner of an island, when it comes to rescue people.”

To hear such a proposal by a country that does not allow neither the Frontex vessels nor the NATO ships to operate in its own 3-nautical-miles of territorial waters, sound if  nothing else like a joke – and a bad one, when he makes such a statement in Athens.

Unfortunately, the Greek FM played the good host and did not give Cavusoglu the proper answer he formally deserved to hear.