While we have been busy with the Refugee Crisis, the institutions have been working for us. The Organisation for Economic Co-operation and Development (OECD), for example, has been collecting economic data, evaluating them and comming to conclusion that

“Boosting economic growth and investment to create jobs, improve the stability of public finances and provide an effective social safety net are crucial to help Greece recover from the profound social costs of the economic crisis, says the OECD in its latest report.

The Economic Survey of Greece says poverty has risen since the crisis to reach one third of the population. Tackling poverty and inequality must be urgent policy priorities, it adds. 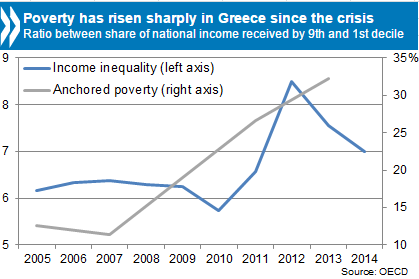 The survey sees the recovery strengthening in 2017 as ongoing reforms and external demand benefit investment and jobs. It stresses that successful negotiations to address public debt sustainability are critical to improve the outlook.

However, major risks remain. Not only could the credit crunch continue to undermine domestic demand but weak activity could be compounded by a slowdown in global trade and softer growth in the rest of the Euro area, the destination of a third of Greek exports.

The Survey adds that the refugee crisis could pose major problems for the Greek economy, particularly if the EU contribution turns out to be insufficient. Preliminary estimates put the cost of the influx of refugees at around 0.4% of GDP in 2015.

Presenting the survey in Athens, OECD Secretary-General Angel Gurría said: “Greece has gone through a painful adjustment and it’s still facing a challenging economic and social outlook. Thus the country needs to recover growth to address such challenges. Reforms are starting to bear fruit, it is now essential to improve implementation, increase Greek “ownership” and focus efforts on both social wellbeing and competitiveness. The OECD will continue to stand by the Greek Government, providing expertise and support to help Greece promote more inclusive and sustainable growth.” (read the full speech)

A targeted guaranteed minimum income scheme for poor households is due to be fully implemented in 2017 but the survey says further action is needed to tackle increasing rates of child poverty. Among its recommendations, the OECD says a subsidised school meals programme should be introduced in poor regions. Establishing a social housing programme should be a medium-term goal, but in the meantime, well-targeted assistance is needed to tackle homelessness and the high cost of accommodation.

Financing such social programmes would represent around 1.5% of GDP. Resources will need to be reallocated from savings generated elsewhere, such as from pensions, defence or improvements in tax collection, according to the survey. The pension reform should focus on better aligning contributions and benefits, reducing special regimes and alleviating the burden on the most vulnerable.

More investment, for instance in infrastructure and logistics, would support exports which are essential to a sustained recovery. Liberalising further the network industries would also give the quality and quantity of investments a boost. EU structural funds should be used more effectively to increase investment in education, research, and innovation, as well as in information and communication technology to help improve skills.

The report says the adjustment process has so far depended too heavily on fiscal measures and labour markets while not enough progress has been made on product market reforms. Product market reforms, introduced since the crisis, have advanced only slowly, and have been undermined by weak implementation and largely left monopoly power in place. Enhancing administrative capacity, stronger ownership of the policy changes and clear communication about the expected benefits to the general public, would improve the effectiveness of the new reform programme.

Tax evasion remains widespread in Greece, thus reducing revenues needed to support social policies. The OECD calls for a broadening of the tax base while the tax administration should be strengthened and given more autonomy, allowing it to free up resources for audits and improved enforcement.

PS what do I read? “Resources for Financing social programmes will need to be reallocated from savings generated elsewhere, such as from pensions, defence or improvements in tax collection“? Decrease pensions and increase taxes? I suppose, the OECD has missed the data of the last 1-2 years as usual…. OECD SG Guria could also call EC President Juncker and ask him about the Humanitarian Aid program he had announced to send to Greece …hm… when was it? Last summer 🙂