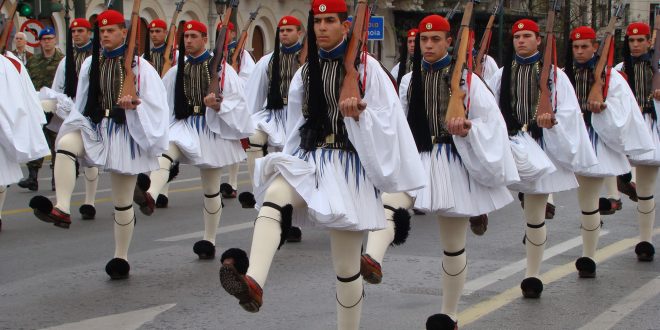 With an impressive military parade Greece celebrates the Independence Day on March 25th. As every year, the parade starts with Evzones, the members of the Presidential Guard, a historical elite light infantry and mountain units of the Greek Army that now has a ceremonial role.

Evzones’ march style consists of normal march time, and at intervals, for several paces, striking the ground forcefully with the right foot.

Whenever the units of proud Evzones are marching there is the loud noise to hear: with every step they take. The sound comes from the 60 nails on the sole of each Evazones’ clog.

Each Tsarouchi (clog) is hand made of red leather and had a black pompon on its front tip. Dependinz of the size, each Tsarouchi has 60 to 120 nails on its sole. On average each tsarouchi weighs approximately 1.5 kilos pounds).

Another significant mark of the Evzones uniform is the Foustanella – a kilt-like garment made from 30 meters of white cotton cloth. The 400 pleats represent the 400 years of Ottoman occupation.

The foustanella derives from the traditional uniform of continental Greece, worn by the fighters against the Ottoman occupation of Greece. The War of Independence of 1821.

The Evzones guard also the Tomb of the Unknown Soldier outside the Greek Parliament opposite the Syntagma Square in downtown Athens. the change of the guard is popular among Greeks and tourists.