WikiLeaks and Julian Assange published today the records of a 19 March 2016 teleconference between the top two officials of the International Monetary Fund who in charge of managing the Greek debt crisis – Poul Thomsen, the head of the IMF’s European Department, and Delia Velkouleskou, the IMF Mission Chief for Greece.

Wikileaks publishes transcript of March 19 IMF call on Greek default and Brexit: “This is going to be a disaster”.

The IMF anticipates a possible Greek default co-inciding with the United Kingdom’s referendum on whether it should leave the European Union (‘Brexit’).

19th March was the day that the IMF team was leaving Greece. It is not clear whether the teleconference was taking place in Greece or in some other country.

The conversation between the two IMF officials plus a member of the negotiations technical team reveals the “strategy” the IMF plans to follow in order to force Greeks to accept more measures and German Chancellor Angela Merkel to accept a debt relief.

It seems as if the IMF “plots” a credit event for Greece. This could occur if the 3. bailout tranche delays due to Review later conclusion and Athens is unable to repay the IMF. A credit event can strengthen the IMF’s position against PM Tsipras – to accept stricter austerity especially in the pensions reform – and Chancellor Merkel -to OK debt relief.

IMF Thomsen aims to delay the agreement with Greece [now IMF has advisor’s role in the Program Review negotiations for the 3. bailout] until it coincides timely with the UK’s referendum and in hope that a Brexit would further worsen the Greek debt issue.

Thomsen:  No agreement with Greece in April/May. We need another ‘Event’ in July to force… Merkel’s hand.

Thomsen: The threat of an imminent financial catastrophe is needed to force the other players {European lenders] into a “decision point.”

No, this is not the transcript of conversation between common common criminals like blackmailers, usurers and loan sharks. It is the IMF officials talking.

Below the WikiLeaks release:

“This is going to be a disaster” remarks Velkouleskou in the meeting.

According to the internal discussion, the IMF is planning to tell Germany that it will abandon the Troika (composed of the IMF, European Commission and the European Central Bank) if the IMF and the Commission fail to reach an agreement on Greek debt relief.

Thomsen: “Look you, Mrs. Merkel, you face a question: you have to think about what is more costly, to go ahead without the IMF–would the Bundestag say ‘The IMF is not on board?’, or [to] pick the debt relief that we think that Greece needs in order to keep us on board?”

Remaining in the Troika seems an increasingly hard sell internally for the IMF, because non-European IMF creditor countries view the IMF’s position on Greece as a violation of its policies elsewhere of not making loans to countries with unsustainable debts.

In August the IMF announced it would not participate in last year’s €86 billion Greek bailout, which was covered by EU member states. IMF Chief Christine Lagarde stated at the time that the IMF’s future participation was contingent on Greece receiving “significant debt relief” from creditors. Lagarde announced that a team would be sent to Greece, headed by Velkouleskou.

Thomsen said internally that the threat of an imminent financial catstrophe is needed to force the other players into a “decision point”. For Germany, on debt relief, and In the case of Greece, to accept the IMF’s austerity “measures,” — including raising taxes and cutting Greek pensions and working conditions. However the UK “Brexit” referendum in late June will paralyse European decision making at the critical moment.

“I am not going accept a package of small measures. I am not…” said Thomsen. “What is going to bring it all to a decision point? In the past there has been only one time when the decision has been made and then that was when [the Greeks] were about to run out of money seriously and to default. […] And possibly this is what is going to happen again. In that case, it drags on until July, and clearly the Europeans are not going to have any discussions for a month before the Brexits…”

Last year Greek Finance Minister Tsakalotos accused the IMF of imposing “draconian measures,” including on pension reform. While Velkouleskou concedes in the meeting that “What is interesting though is that [Greece] did give in… they did give a little bit on both the income tax reform and on the…. both on the tax credit and the supplementary pensions.”

But Thomsen’s view is that the Greeks “are not even getting close [to coming] around to accept[ing] our views.”  Velkouleskou argues that “if [the Greek government] get pressured enough, they would… But they don’t have any incentive and they know that the Commission is willing to compromise, so that is the problem.”

While the Commission insists on a Primary Government Budget Surplus (total tax minus all government expenditure excluding debt repayments) of 3.5%; the IMF thinks that this target should be set at 1.5% of GDP. As Thomsen puts it, “if [Greece] come around to give us 2.5% [of GDP in tax hikes and pension-wage-benefits cuts]… we should be fully behind them.” — meaning that the IMF would, in exchange for this fresh austerity package, support the reduction of the Primary Surplus Target imposed upon them from the 3.5% that the European Commission insists on to 1.5%.

These targets are described as “very crucial” to the IMF. The IMF officials ask Thomsen “to reinforce the message about the agreement on the 2.5%, because that is not permeating and it is not sinking very well with the Commission.”

At one point, Velkouleskou refers to an unusual solution: to split the problem into two programs with two different targets: “The question is whether [the Europeans] could accept the medium term targets of the Commission, for the purposes of the program, and our targets for the purposes of debt relief.” Thomsen further explains that “They essentially need to agree to make our targets the baseline and then have something in that they hope that will overperform. But if they don’t, they will still disburse.”

The EWG [Euro Working Group] needs to “take a stand on whether they believe our projections or the Commission’s projections.” The IMF’s growth projections are the exact opposite of the Commission’s. The Commission projects a GDP growth of 0.5%, and the IMF a GDP decline of 0.5% (even if Greece accepts all the measures imposed by the IMF). [ Source: WikiLeaks, also conversation transcript]

On Tweeter @wikileaks said it has verified the authenticity of the records.

Excerpt from transcript: Thomson seems confident that the Brexit will indeed happen

Prompt was the reaction of the Greek government to the WikiLeaks release, Prime Minister Alexis Tsipras called an emergency meeting with Finance Minister Euclid Tsakalotos and Foreign Minister Nikos Kotzias on Saturday morning

“We demand an explanation as to whether to creation of  bankruptcy conditions in  Greece is an official position of the IMF,” Gerovasili told media.

So far no reaction by the IMF.

The timing of the WikiLeaks release is very interesting as Delia Velkouleskou is supposed to come to Athens today and the program review talks to start again on Monday. 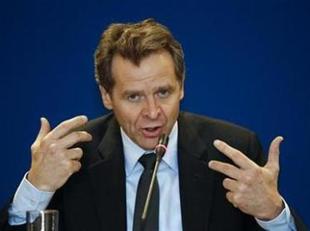 Time difference issue, Thomsen in Europe does not dare to wake up Christine Lagarde, I suppose.