Sixteen volunteers have been briefly detained at Idomeni on Tuesday as Greek police tries to find out who incites refugees and migrants to cross the closed borders of neighboring FYROM.

With enhanced controls on the roads leading to Idomeni camp, Greek police units have been doing paper controls and search in cars, trailers and every vehicle that was trying to reach the camp since the morning. Passports and IDs were double-checked, trunks were opened and trained dogs were sniffing around.

Rumors spread already on Monday evening were claiming that the “borders would open on Tuesday morning” and there were calls to the refugees and migrants to stage again a protest at the border fence. This time there were no leaflets and flyers, the “news” was spreading from mouth to mouth. Allegedly, the protest-organizers were to distribute also molotof cocktail bombs.” 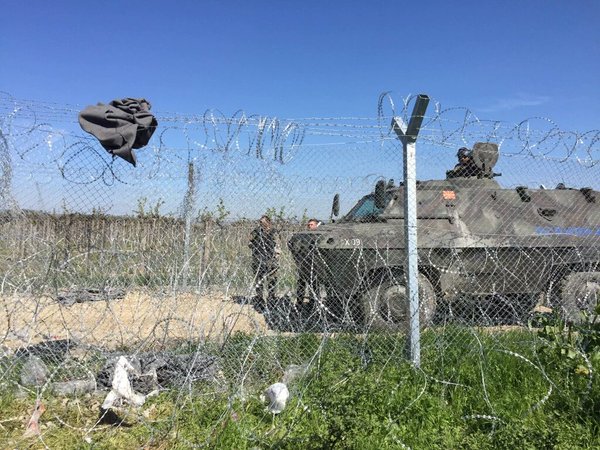 FYROM was prepared to face the new challenge and had sent tanks at the fence already in the morning. The protest was said to be launched at 11 a.m.

However, except for a handful of young men, nobody else felt the need to join the protest action. Shocked by the massive use of teargas and rubber bullets fired by FYROM police and army on Sunday, the majority of the people in the camp preferred to stay around their tents and to not expose themselves and their children to danger.

In fact, since yesterday, many families decided to leave Idomeni and move to “accommodation centers.”

Volunteers and the “Open Borders” movement speaks now of “massive repression of civic society” of attempted “criminalization of volunteers” while there are some claims that “the detainees were fingerprinted”.

According to Greek Police, 13 foreign nationals and two Greeks were questioned and remanded on Tuesday at the camp of Idomeni. The detentions took place on the bridge of Axios river, on the road used by anyone entering Greece from FYROM. On Monday, Prime Minister Alexis Tsipras said that those inciting the refugees and the migrants were foreign nationals who had accommodation in FYROM and would enter Greece every morning.

Tsipras spoke of certain “solidarity volunteers”, of NGO representatives, and of “some with foreign nationality who have accommodation in FYROM and cross daily the borders to Greece” and criticized them for having in mind to get funds than to offer to those in need, thus putting their lives in danger.”
Video: police stops a car with 3 Swiss volunteers, find some spray cans in their car. The three young women were taken to police station for identification.

According to media, most of the suspects are foreign nationals – from Germany, Britain, the Netherlands, Sweden, Austria, Portugal and the Czech Republic. “They were questioned in connection with reports that Sunday’s storming of the border, as well as several similar incidents in the past, may have been incited by anti-establishment groups.”

According to reports, the suspects said they are pro-refugee activists but are not connected to any of the nongovernmental agencies that are active in the area.

Only one of the 15 suspects, a German, is still being held after police found him to be in possession of an illegal knife.

The Greeks are said to belong to anti-authoritarian movement.
Every now and then, when authorities try to empty the “camp” at the port of Piraeus from 5,000 refugees and migrants, “unknown individuals” try to stop them with flyers claiming the borders would open again.
According to Greek media, the inciters were “αλληλέγγυοι i.e volunteers and solidarity activists from Germany, Spain and Italy who operate in Greece under the cover of dubious NGOs as well as members of the local anti-authoritarian scene.”
We learn a new Greek word: αλληλέγγυος (sing)- αλληλέγγυοι (pl)
Of course, this is bad for all the hundreds of real αλληλέγγυοι – anonymous volunteers – who have been feeding and taking care of thousands of refugees and migrants since last spring and without their help the million people who cross Greece would have faced a real humanitarian crisis.

PS My mom used to have a knife to cut greens and vegetables for our meal. No idea, if it was legal or illegal.