We have been knowing this and there have been reports in the past: that the majority of bailout money went  -and still goes- to banks and the lenders and not to the Greek state or people. The bailouts were supposed to get Greece back on its feet – only that Greece was forced to stand on lenders’ feet who claimed the money who gave to Greece right away and thus with juicy interest rates. What was obvious to anyone adding together the bailout tranche of the first now bailout loans, is now confirmed by a detailed study conducted by the Berlin-based European School of Management and Technology.

According to German economic news daily Handelsblatt that has obtained a copy of the study exclusively:

The aid programs were badly designed by Greece’s lenders, the European Central Bank, the Europe Union and the International Monetary Fund. Their priority, the report says, was to save not the Greek people, but its banks and private creditors.

After six years of ongoing bailouts amounting to more than €220 billion, or $253 billion in loans, Greece just cannot get out of crisis mode.

This accusation has been around for a long time. But now, for the first time, the Berlin-based ESMT has compiled a detailed calculation over 24 pages. Their economists looked at every individual loan instalment and examined where the money from the first two aid packages, amounting to €215.9 billion, actually went. Researchers found that only €9.7 billion, or less than 5 percent of the total, ended up in the Greek state budget, where it could benefit citizens directly. The rest was used to service old debts and interest payments.

The report comes as the European Union and the Greek government prepare to hold negotiations about further debt relief. E.U. Economics Commissioner Pierre Moscovici said he hoped all sides could reach an agreement at a special meeting of the Eurogroup of euro-zone finance ministers next Monday. Extensions of credit repayment periods, deferments and freezing interest rates are all being discussed. This “debt relief light” would not affect private investors – just the loans from Europeans.

At the moment, German Chancellor Angela Merkel and her colleagues are not inclined to listen to the Greek prime minister, Alexis Tsipras, as he asks for a new multi-billion euro aid package. It is easy to understand why. The chancellor must feel she has seen it all before. She has experienced many near state bankruptcies since early 2010 when she put together the first bailout for Greece. (Handelsblatt)

“With these aid packages, especially the European banks were rescued, ” ESMT President Jörg Rocholl told Handelsblatt. Rocholl belongs also to the Scientific Advisory Board at the Federal Ministry of Finance. “With €86.9 billion euros old debts were paid, €52.3 billion were spent on interest payments and €37.3 billion euros were used for the recapitalization of Greek banks.”

Greece had also benefit form the bailout program, but according to ESMT calculations, the study raises doubts on whether the aid programs were constructed correctly: With the bailout loans debt was serviced although Greece is de facto bankrupt since of 2010. “European taxpayers have paid off the private investors,” Rocholl stressed.

Above all, the rescue of Greek banks has proved to be a catastrophic business for taxpayers. According to ESMT calculations, €37.3 billion from the first two bailouts were poured into the Greek financial institutions. But these bank aids have now been almost completely destroyed.  Since their recapitalization on 2013, the banks have lost around 98% of their stock market value. 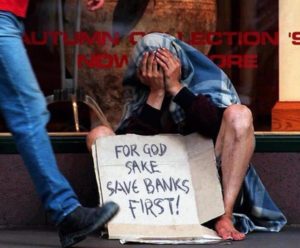 Right now, Greece and lenders try to conclude the Review of the third bailout program of €86 billion and ask Greeks to find in their private gardens and balcony flowerpots measures worth of  €5.4bn + €3.6bn = 9 billion euro for 2016, 2017 and 2018.

The Study in German is here to download however behind a Paywall.

PS and before Schaeuble admits his fatal failure in managing the Greek crisis and the bailouts, and that he cannot add 1+1+1, he’d rather keep his bitter-sour and rigorous position. It needs guts to admit mistakes and change the route. But, not Schaeuble. Not. That’s why he started to make plans for Grexit already in summer 2011, a year after the first bailout of 2010. He knew the program would not work, not matter what the Greeks did or did not.