Protest rallies against the Pensions Reform and the new taxation system started already at 10 o’ clock on Sunday morning with thousands of Communist KKE union PAME-members to have gathered at Syntagma square outside the Greek Parliament. An hour later, members of private sector unions umbrella GSEE started to flock to Klafthmonos square in downtown Athens. They will march to the Parliament as well. 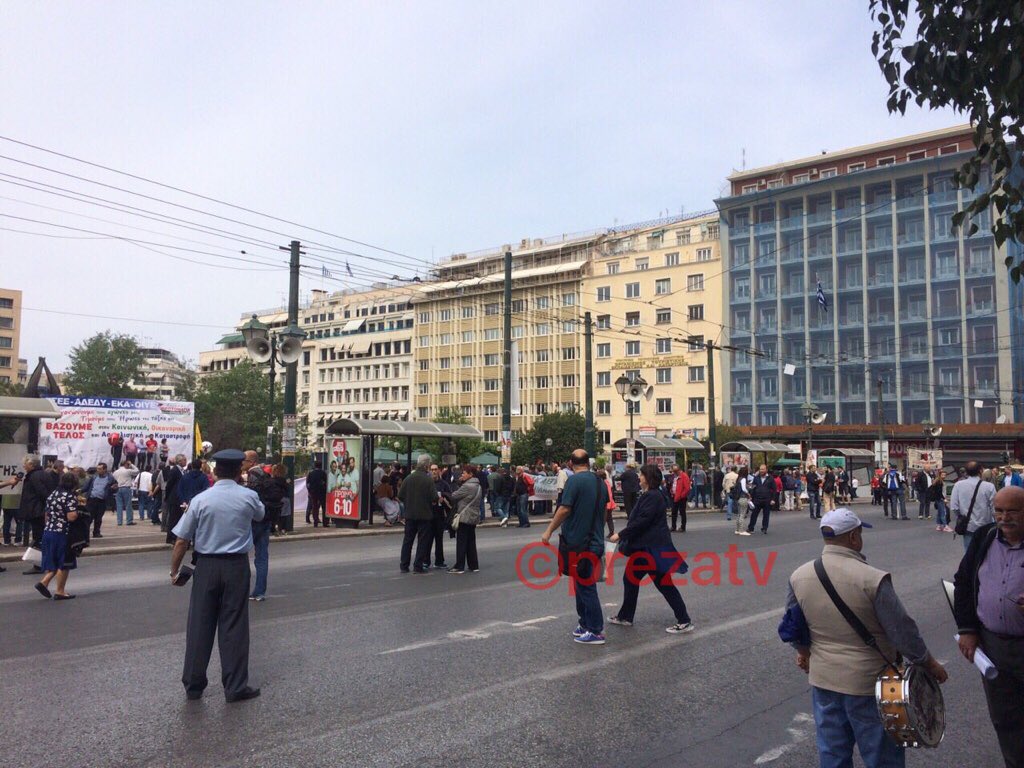 At 12 o’clock noon, journalists will protest the dissolving of their professional social insurance fund.

Public sector union ADEDY has called for the big protest rally at 6 p.m. outside the Parliament.

Greece’s national Garden in Athens on strike? No. It’s closed 3 days for security reasons as the Parliament building is right next to the Garden. When PASOK and ND governments were voting for austerity, the National Garden was often used by leftist protesters to launch molotov cocktails at the Parliament.

Public and private sector unions and associations have been on strike fever since Friday, paralyzing trade, public and municipality services and transport. Even petrol stations are on strike on Sunday.

Retail shops that were supposed to be open today due to Spring Sales are closed.

Also farmers who joined the Communist party protest on Saturday are expected to be present outside the parliament on Sunday too. 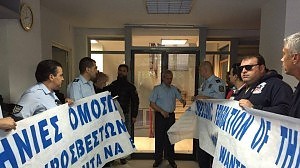 A group of 15 protesting policemen blocked the entrance of SYRIZa offices in Athens on Saturday.

After the 48-hour strike launched also by workers at public transport means, a new strike and work stoppage schedule has been launched for Sunday in order to facilitate protesters to join the rallies and stay outside the Parliament until late at night. 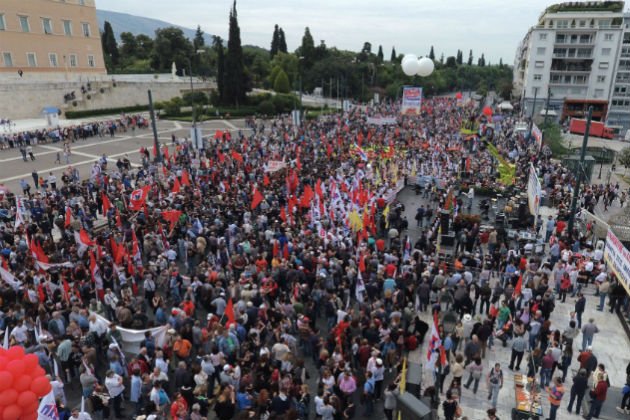 PAME outside the Parliament

The voting is expected to take place around midnight Sunday, following a long debate in the Plenary, that stated on Friday morning. All opposition parties have declared that they will down-vote the Pensions Reform and the new Taxation system.

SYRIZA tries to justify the measures that will dig deep in the pockets of pensioners and taxpayers for one more time.

Finance Minister Euclid Tsakalotos said in Parliament “We have done what we promised to do with solutions that are achievable.”

Labor Minister Giorgos Katrougalos, responsible for the Pensions Reform said that “we do this that the country has been needed for decades.”

On Friday, Prime Minister Alexis Tsipras defended the Pensions Reform saying “in a couple of year we would not be able to guarantee for the payment of pensions.”

Arguments between SYRIZA ministers and lawmakers and former ministers of PASOK and New Democracy occasionally derailed the debate in the Parliament.

SYRIZA-Indepentent Greeks coalition has 153 seats in a Parliament of 300.No ‘bad surprises’ are expected after the Tsipras speach to SYRIZA parliamentary group on Friday and SYRIZA MPs are convinced that “the country has to exit the spiral of austerity as soon as possible.” No rebel voices have been heard so far also in the IndepGreeks front.

The government majority is thin, but if there are no rebels, the measures will pass tonight, so that the Greek government can go to the Eurogroup meeting on Monday with a proven record that it complies with the lenders commandments, hoping for the disbursement of the bailout trance and discussion on Debt Relief to be launched.

Of course, Greece would be not Greece if  there were no exemptions in the Pensions Reform for specific categories of civil servants like the Armed Forces, for example, and for whoever else I missed. diplomats are also a special category of the species of civil servants. And high salaries of public sector remain high…

Meanwhile professional unions like the Technical Chamber TEE, the Doctors’ Association ISA and the Journalists’ union ESHEA threaten with expulsion from the unions those MPs who will vote in favor of the measures, and they include PM Tsipras as well.

PS While some structural reforms in the Pension funds were necessary long ago, the problem is that they occur in the 7th year of economic crisis and with many pensioners supporting financially their unemployed children and their families. Grave mistakes of the past like the scandalous early retirement after 15 years independent of age in the public sector cannot be corrected, of course. Neither can be corrected early retirements after 25 years in the public sector with main pension reaching the full salary.

Another blow to Greek taxpayers is that the government crossed all its “red lines” concerning the tax-free threshold that go down to €8,636 from €9,500 now.

In the 7th year of austerity there can not be ‘good’ austerity measures worth 5.4 billion euro. And it’s sad to see SYRIZA defending with a more leftist rhetoric than PASOK and ND used when it was passing the measures of the first and the second bailout. The substance remains the same.