Weird things are happening in the Mediterranean Sea. Almost simultaneously three countries in the Mediterranean have closed their airspace and territories for aircraft departing from Libya. The exceptions are very few and could hind on the transport of military and evacuees. At the same time, three NATO exercises are taking place but the airspace closure and directly little to do with that.

The first country to close its airspace for aircraft departing from Libya” was Italy, followed by Malta. Today it was Greece’s turn. All three countries issued relevant NOTAMs:

Italy on May 11 and closes the airspace May 11 – August 8 2016, consequently at the same period Malta that issued the NOTAM on May 12.

Greece’s NOTAM was issued today, May 25th and the period for banning aircraft departed from Libya to overflight and land  is given as May 25th – September 8, 2016.

The overlapping FIR closure period by the three countries is actually May 25 – August 8 2016.

What is interesting in the Greek NOTAM are aircraft like “military aircraft of other nations, state flights or other VIP flights, ambulance flights” are not affected by the ban. Italy records also some exceptions but not of “ambulance aircraft.”

Why do Greece, Italy and Malta need to close their airspace and territories to aircraft departing from Libya? Is there something the NATO allies have on their mind? Or the NATO itself? Something like an imminent intervention against Libya? It was beginning of April when US President Barack Obama and Secretary General Jens Stoltenrbg had declared that they could help Libya to face the Islamic Caliphate.

Defense news website OnAlert.gr that brought up this exclusive story, notes that there is already since May 17th the NATO exercise “Phoenix Express 2016” (Phoenix 2016) taking part off the island of Crete.

“The at-sea portion of the exercise will test North African, European, and U.S. forces’ abilities to combat illegal migration, illicit trafficking, and movement of materials for weapons of mass destruction. Additionally, participating forces will work together to practice procedures of search-and-rescue in cases where vessels are in distress. Participating Maritime Operations Centers (MOCs) will exercise information sharing practices.” 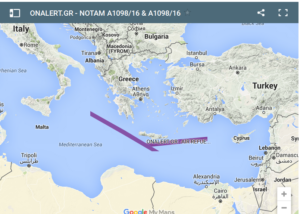 According to Greek NOTAMs refering to NATO Refueling exercises.

According to OnAlert,gr there has been increase of NATO exercises in the area recently.

So it looks as if Greece will play a significant role in a possible intervention against Libya and even be able to receive aircraft that have departed from Libya carrying evacuees, VIP and other…

Such in case that the scenario comes true and thus before summer is over.

It is not clear whether also Libya’s neighbors Egypt, Algeria and Tunesia have issued similar NOTAMs.

As the news spread around the concerned world, the Alliance spokesperson was busy tweeting to several media outlets and Twitter accounts (also to KTG) to dismiss as “baseless rumors” that NATO could be planning “any combat operation in Libya” or that it had “requested the closure of the airspace” – although much to my knowledge, nobody said the NATO had requested the closure.

Of course, the official NATO should issue an official statement and not dismiss “claims” or “scenarios” on Twitter.

However, daily Kathimerini noted yesterday morning (May 26/2016) with regards to Airspace closure:

“The move has been described by certain sides as Greek providence in view of a joint NATO-EU operation in Central Mediterranean in summer and that’s why the NOTAM covers the whole period up to September 8th, 2016. In any case, in order to extend the NATO-EU operation in the Mediterranean, there must be decisions by the North Atlantic Council and Brussels, something that has not be done so far.”

Kathimerini does not elaborate what kind of operation this joint NATO-EU could be.But RT.com that quoted Kathimerini spoke of a “EU and NATO joint training in the Mediterranean” adding “The Phoenix Express 2016 exercise is scheduled for the summer off the island of Crete.”

“The explanation, however, doesn’t convince some observers, who believe that the alliance is preparing a new full-fledged military intervention in Libya.” (RT.com)

Ahead of the NATO Foreign Ministers meeting, Reuters wrote on May 19/2016 that the “NATO is divided over bigger role in stabilising Libya” and it was facing a challenge to “consider a bigger role for the alliance in Libya to help a new unity government push back the growing Islamic State threat,” but some allies want the focus to be on a naval mission to stop refugees teeming into Europe.

“NATO has a clear mandate that we should stand ready to support the new government in Libya if so requested,” NATO Secretary-General Jens Stoltenberg said before the meeting. “We are not addressing any potential combat operation,” he said.

However, while USA and UK would support a bigger role for NATO in Libya, Germany and France allegedly want to throw the ball in United Nations’ court first to get russia’s approval.

KTG understands that the NATO and the EU do not want a “troops and boots” operation but they are clear that something needs to be done.

Maybe some members would go individually against Libya? Time will show.

Nevertheless, with regards to the issuing of the Air Space closure NOTAM, Kathimerini notes:

“Diplomatic sources said that the adoption of this ‘rolling’ NOTAM in the area is an established practice since the collapse of Libya, in order to not have to renew them whenever the need arises for problems management in air traffic.”

Meanwhile, it is also clear that Libya’s neighboring countries did not issue any NOTAMs.