Russian President Vladimir Putin came to Athens,  signed agreements, prayed in Mount Athos and left. On bilateral level, he signed a series of multiple agreements with the Greek side, a declaration of good will and cooperation in tourism, culture, and the usual staff. For sure, renewal of Greek-Russian relations is something that both countries hope to work on geopolitical, diplomatic, investment and business level. For Greek government, it is certainly important to have attracted the Russian investment interest and the political backing of Kremlin. 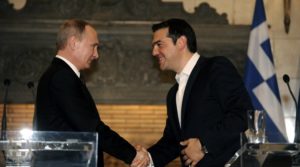 However, statements by the Greek side did not have the ‘revolutionary and cheerful spirit they had last year, when the more radical left flank of Lafazanis & Co was still part of SYRIZA. They left in summer after they disagreed with the signature of the 3. bailout and Prime Minister Alexis Tsipras had to comply with reality: relations with Russia are good, but the lenders sit in Brussels and Washington. Investments are welcome but leaning too much towards Moscow is not allowed. Period.

The two-day visit in Athens and the monks ‘republic’ on Mount Athos was in fact a win for Vladimir Putin himself. In his first trip abroad this year and knowing that all eyes are turned on him he did not miss the chance to take his bow and shoot his  arrows at every possible direction.

He slammed US missile shield bases in Romania and Poland, declared that the “Crimea issue was over”, criticized the EU sanctions towards Russia and told  his Turkish counterpart that the shooting down of the Russian aircraft was an act of “war crime.” 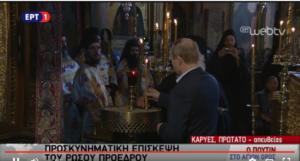 Then under unbelievably draconian security measures Putin went to Mount Athos to light a candle and pray for peace in the world – or for the good relations between the Russian and the Greek people and the signed agreements to turn into mutual economic and geopolitical benefits.