The Medical Association of Lasithi calls for the punishment of Michalis Spyridakis, a veterinarian who selflessly offered medical help to citizens due to shortage of doctors and nurses in the General Hospital of the area.

The case of a vet treating humans became known last week by Sunday newspaper Proto Thema. Michalis Spyridakis in the town of Ierapetra had admitted to treat citizens with minor injuries whenever he was asked to. 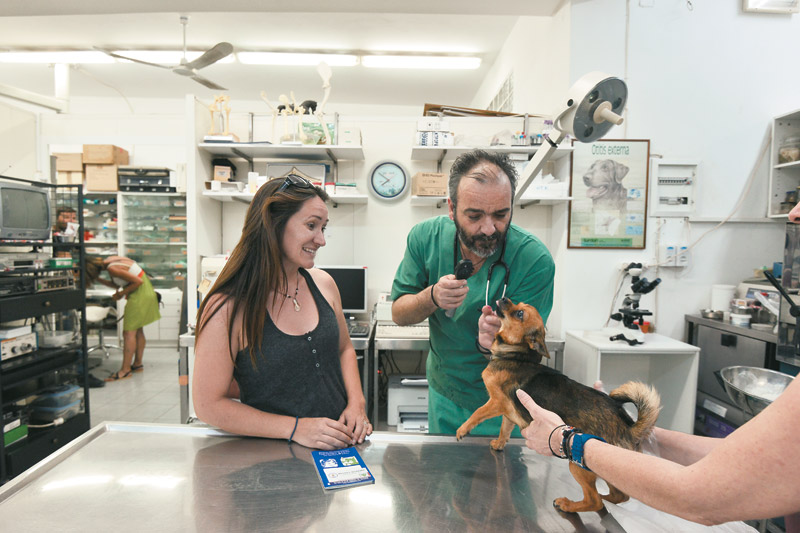 The situation in the public hospital of the area is dramatic due to the austerity budget cuts and the personnel shortage since 2010.

“The one and only hospital pathologist for 60,000 people of the town and the broader area is suffering from health problems and is not not on call 26 to 30 days of the month. There are no gynecologists, so pregnant women have to cover long distances in order to go to other hospitals on the island. Even for a simple X-ray people may need to seek a laboratory 30 km away.  The result? Patients with problems that can not wait seek therapy by the … vets!” Proto Thema wrote.

“Personally I have assisted in emergency cases, especially for friends of mine, who could not get treatment in the hospital, Spyridakis told the newspaper.

He added not long ago he was forced to treat a pediatric incident at the veterinary clinic, which concerned the change of vein cannula. “Otherwise, the child and his parents would has to go to a hospital in Herakleio, 120 km away, as neither the hospital in Ierapetra not in Agios Nikolaos who serve the case.”

There have been many such incidents and “and if we can do something we do it in order to relieve people from suffering and trouble,” the vet said adding that the majority of human incidents he treats concerns “the removal of  sutures and pins, because a lot of people work in the greenhouses, and wound treatment.”

A local tavern owner sought the vet’s help when he needed to have the gauze on his  2. degree burn trauma arm and shoulder changed. “The hospital in Ierapetra said they couldn’t do it and I had to go to a hospital 35km away. the vet is a friend of mine, I know his skills and so I went to him, ” the tavern owner said.

Another patient, a hairdresser also sought the vet’s aid because there was no ophthalmologist in the hospital of Ierapetra when she needed him. She also had to drive either to Agios Nikolaos (35km)  or to Heralkio (120km) and she did not feel secure to do so as the lachrymal gland was blocked. “In five minutes I was OK,” she said praising the vet’s help.

These and many more testimonies by thankful patients did not hinder the Medcial Association to take vet Spyridakis to the prosecutor because as the human doctors claim “when a vet treats a human, he puts the public health at risk.”

PS reading the many testimonies by the vet’s patients, I understand  that over there in Ierapetra the public health is at risk anyway.