Tourism authorities in Lesvos closed down Hope Centre, a hotel turned into a shelter for refugees, on Monday in the presence of locals. Hope Centre is a former holiday hotel British expats couple Eric and Philippa Kempson leased for a good cause. Authorities ruled that the 20-room center can no longer be used to provide shelter, food and clothing to refugees and migrants in Molyvos village of Lesvos, as they had no license. The Hope Centre cannot even be used as a warehouse to store supplies so everything in it had to be removed by a deadline of Monday.

The Kempsons were also being hit with a €10,000 penalty for running a hotel without a license.

The couple who has done exceptional charity and aid work since the beginning of the refugee crisis, claim they are the victims of an island backlash against the migrants.

Philippa, 43, and Eric, 60, originally from Newport, Gwent, have lived on Lesbos since 1999 and first began helping refugees two years ago.

Eric Kempson and daughter EJ rescue a boy from the sea

Earlier this year they took over the lease of the Hotel Elpis with daughter EJ, determined to open it as a shelter. The couple’s refuge was doomed at heated meeting earlier this month with tourism officials.

Philippa told Daily Mirror: “It became clear that never, under any circumstances, will they allow the center to be used to assist refugees. They were openly hostile, they refused to look at us or address us directly and they resorted to banging on
tables and screaming.” 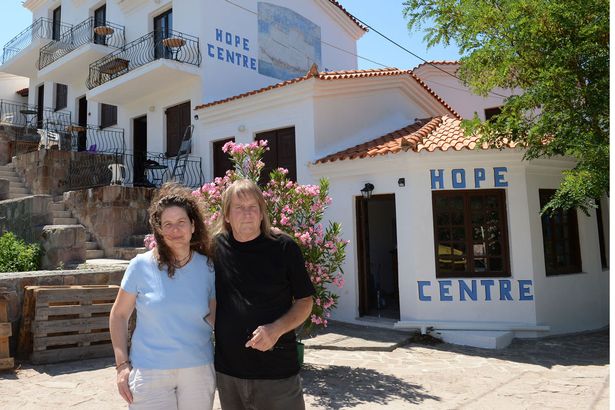 According to reporting from Lesvos, the hotel at the touristic beach of Eftalou remained closed for years and was rented and repaired the British family through sponsorship from Western Europe. The Hope Centre planned to act as a “seaside haven for refugees.”

When officials from Greek Tourism Agency (EOT) moved to seal the hotel this morning, local police was deployed to assist them.

During the sealing process, on one side, there were the Kempsons and their supporters, primarily members of non-governmental organizations and caring citizens some 10 people, while on the other side there were residents and businessmen of Molyvos, some 150 people.

“We demonstrate the will of the residents of Molyvos to protect refugees from the greed of NGOs and to protect the local economy,” members of the Coordination Committee of Molyvos and the nearby village of Petra told ANA.

From the side of the Regional Tourism Service of Northern Aegean Sea, officials said that “Done was what it had to be done according to the Greek legislation with regards to the operation of a hotel complex,” and that the 10,000 euro fine was imposed to the Kempson family for “the illegal operation of the hotel, while a significant part of the fine was imposed because the family had obstructed the work of the tourism service staff when they visited to check the hotel.”

Philippa Kempson had told Daily Mirror, that the centre was at no point in operation as a hotel.”

Nevertheless, the conflict between the Kempsons and the local community seems to have a long past, and locals had already complained to the Prosecutor of the island last January claiming that the hotel turned into a refugee center would operate
“in one of the most beautiful bathing beaches of Molyvos surrounded by many hotels and hostels.”

Furthermore, they claimed that the hotel was “not in operation for the last 8 years, bearing visible cracks on the walls and was in a very bad situation.” The residents had demanded from the prosecutor “to check the lease contract, if there was any, as well as the condition of the hotel and its potential legal operation, but mainly whether there was a legal permission for its operation.”

Local tourism operators and hotel owners complained to ANA about the location of the Hope Centre claiming that it would downgrade the area where tourism is main source of income for the community. “There are enough place in the broader area of thei island for such a project,” Nikos Molvalis form Lolyvos Tourism Agency said.

Two sides, two point of views. KTG is too far away for a good report and unfortunately had no time to contact Philippa.

Two sides standing against each other in a small local community. They may be both right and wrong.

And I believe, the local council and authorities would have never given a license to the Kempsons to operate the Hope Centre -whether as hotel for refugees or as a private refugee center.

Much to my knowledge, local councils have not given licenses for X or Y for much minor issues.