Unbelievable racism by a Bavarian politician member of the delegation accompanying German Vice Chancellor Sigmar Gabriel in Athens. According to Greek media, the incident took place on Thursday during the visit of the German delegation  in Prime Minister Mansion and while photo reporters were trying to capture the best angle during the official photo-shooting for Gabriel and Tsipras. 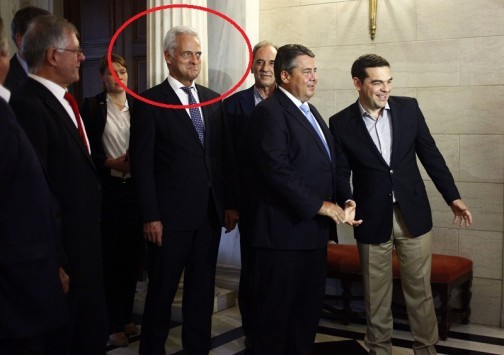 Inside the building of the Prime Ministry, the photographer of  state Athens News Agency accidentally pushed Peter Ramsauer (CSU) whose immediate reaction was to say in German “Do not touch me, filthy Greek!”

His colleagues informed the photographer about what the Bavarian politician had said, the reporter asked Ramsauer to repeat the phrase in English. And indeed, the former German Federal Transport Minister boldly repeated it!

Ramsauer later denied the incident and claimed that he suffered …bruises from the contact with the photographer.

“The incident was confirmed by the official photographer of Sigmar Gabriel,” daily Avgi notes.

As expected about this unprecedented insult, tension went high and the Greeks asked the German delegation to apologize for this despicable behavior of Ramsauer.

The German delegation but also the German Embassy in Athens reportedly apologized.

In a statement, Greek Photo-Reporters’ Union condemned the “discrediting reaction” by Ramsauer and described him as “arrogant” thus noting that the GPhU “recognizes that the greatest challenge to who occasionally hold power is the modest management of it.”

According to German newspaper Die Welt, Ramsauer claimed that he “was pushed aside by a pressing photographer  with a powerful ribs hook.” Late Friday and after he has returned from Athens, the ex Minister rejected the accusations with a post on his FB page.

Peter Ramsauer is known for his anti-Greek feelings and is supporter of finance Minister Wolfgang Schaeuble’s vision to have Greece outside the eurozone. In February 2015, had said that he would vote against any new aid to Greece accusing the then newly elected SYRIZA-ANEL government that it had no “solidarity policy.”

Why did Gabriel take Ramsauer with him? Apparently for his lobby skills…

The least the German political leadership can do is to ask Peter Ramsauer to resign.

Meanwhile, Greek social media are having a party with Ramsauer and according to some readers reports, many visited his Profile of Facebook and left their own filthy comments. Someone on Twitter said that his FB profile was down or locked or something…

Or that he had set privacy settings excluding IP from Greece.

On German media, internet users are divided on the issue with some claiming Ramsauer could not possibly have insulted somebody like that and others thinking ‘very possibly he did it’ in his arrogance that he would not be understood.

Little Sherlocks around the internet investigate the motives of the two sides:

The truth would shine if there was some recording…

Claims that Ramsauer did not join the meals during the two-day visit in Athens because meals were prepared by Filthy Greeks cannot be confirmed. And I assume, that they were also completely baseless – Unless the German “shepherd” – as Ramsauer describes himself – came down from the Upper Bavarian hinterland bringing his own Cheese & Sausage in Athens.

Off topic? Suddenly Sandra Bullock’s appearance in Bavarian costume makes sense. Rasmauser’s wife is Bullock’s cousin. We have some proposals for next time Miss Congeniality meets the esteemed member of the German Christian Social Union (what a joke for a party name!).

PS sadly, the only worth reporting news from Gabriel’s visit was this incident. ugh!