Nearly half a million Greeks have left the country in search of better opportunities abroad since 2008 due to the financial crisis, a report by the Bank of Greece shows. Educated professionals are among those leading the Greek Crisis exodus, while in the past it was mostly unskilled workers and farmers leaving the country for a better future.

The current exodus is being led by young professionals seeking their fortune in Germany, the UK and the United Arab Emirates.

According to the report as published by Kathimerini:

The exodus started gradually in 2008, a year before Greece’s debt crisis erupted, exceeding 100,000 in 2013 and growing in 2014 and 2015. As noted in the report, Greek emigres’ main motive is to find work as opportunities in crisis-hit Greece are few and far between, with an unemployment rate that remains above 25 percent. 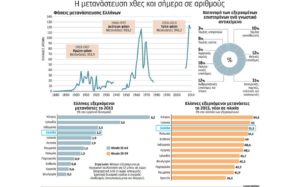 Greece ranks fourth among the 28 European Union member-states in terms of mass emigration in proportion to its work force aged 15-64, after Cyprus, Ireland and Lithuania.

It ranks third, after Cyprus and Spain, in terms of the proportion of young people aged 25-39,  leaving the country.

full article in ekathimerini . a little more info in Kathimerini.gr

PS I would like to know more about BoG methodology and age groups but I didn’t see a press release in BoG website.