Greek police arrested  Nigerian man wanted for cheating a Belgian trader over 10 million dollars. The 56-year-old man from Nigeria, Ali Kassem Soobhe, was arrested in the suburb of Voula in south-east Athens on Thursday. There was a European arrest warrant against him issued by French authorities.

The fraud Soobhe committed together with an accomplice against a Belgian Wall Street trader has “epic proportions,” daily Ethnos notes.

In fraud story in short:

The trader who was working at a brokerage firm in Wall Street “retired’ some time in  2008 and wanted to invest in profitable businesses: one of them being the purchase of an artificial island called “Greece”, part of the artificial islands complex called “World” in Dubai, as wells as the construction of a luxurious hotel complex consisting of 18 villas and 42 apartments.

However, due to the Lehman Brothers collapse in 2008, the trader could find no bank to grant him an investment loan of 125 million USD.

A Swiss bank recommended to him, two Belgian entrepreneurs of Nigerian origin. One of them was the man arrested in Athens: Ali Kassem Soobhe or Karim Lakkis with passports from Lebanon and Guinea, and the other was a man named Hussein Ali Sulaiman.

The two would pay to the Belgian trader $125million for a commission of 8% or some $10million. their capital would come form Nigeria oil revenues.

The traders’ initial reluctance to agree to the offered deal are bent when a fake Nigerian Minister jumps in and some “diamonds” are shown to the victim as guarantee.

Fraudsters and the “minister” meet the trader in London. then in Paris, where they give him one diamond.

At the end of the negotiations that last about half a year, the trader transfers to accounts of the fraudsters part of the commission, $8.3million.

However it turns out, that the Nigerian Minister was as fake as the diamonds, while two two fraudsters disappear.

Kassem and Sulaiman are eventually being arrested in Paris, France. Kassem returns $1.9million that is used also a collateral for his bail. When the trial starts, authorities realize that Kassem is fugitive.

Fugitive until yesterday. He was arrested in an apartment in Voula and now he is in Greek detention awaiting extradition. 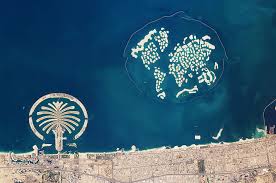 one of the islands on the right is ….Greece

As for the artificial island called “Greece” is still waiting for investors, once the Dubai project is being launched again. The construction of the 300 artificial islands of the “World” project remains “frozen” due to the crisis that hit Dubai.