Double “NEIN” from Berlin for German WWII Reparations to Greece

Berlin is not tired to reiterate and chew the same old “NEIN” when it comes to World War II Reparations to Greece. A double NEIN came today Monday, after the statements by Prime Minister Alexis Tsipras in Thessaloniki over the weekend.

Government spokesman Steffen Seibert said for one more time that the issue is “legally and politically settled.”

In the same tone even though a tiny bit more diplomatic, Foreign Ministry spokesman Martin Schaefer said that “the German government has no intention whatsoever to formally launch negotiations and discussions or something similar with the Greek government on the issue of reparations.”

However, Schaefer did not categorically rule out that this issue may be the subject of discussions in the context of a broader dialogue between the two countries, a dialogue to be conducted under the auspices of the Greek and the German Foreign Ministry. Schaefer confirmed that the Greek Foreign Ministry has made concrete proposals for a dialogue to intensify Greek-German relations beyond the diplomatic level.

I know where the German willingness for a constructive dialogue will end: into endless meetings without concrete results, like the endless and fruitless Greek-Turkish dialogue on the issue that divide the two countries.

Just to keep in touch, so to say.

Of course, Germany is determined to turn down any Greek claims for WWII Reparations because if Greece will receive some, other countries occupied by the Nazis in the WWII may raise claims as well. And then, the German export surplus of several billion euros would be at risk to have to be spent on war reparations. 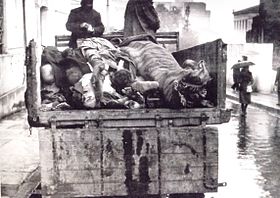 The problem of Germany is that the SYRIZA-led government is determined too to bring up the issue again and again.