EU Commission found THE solution: Migrants will remain on Greek islands “as much as possible”

Fianlly! The European Commission found a solution for the Migration crisis in Greece and the Greek islands. During a press conference on Tuesday, the EC coordinating spokesperson, Natasha Bertaud, revealed the well-hidden plans:

Derek Gatopoulos is a journalist at Associated Press 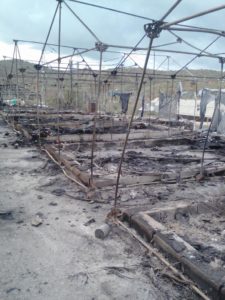 Burned down tents in Moria – Would Bertaud or Juncker sleep here? hhhouuuops! They are not migrants…

Bertaud’s statement comes just hours after a fire burned down tents and infrastructure in the hot spot in Moria, leaving some 4,000 refugees and migrants without a bed or  a blanket or a tent over their head.
There are currently 5,600 refugees and migrants stuck on the islands of Lesvos that before the fire had a capacity for just 3,500.
If this is all the EC can say after the ugly incidents of Monday on the island of Lesvos, it is clear that the migrants will remain indefinitely on the Greek islands, the EU Turkey Deal was just a bunch of papers to use for packing Fish & Belgian Fries and that the European Union will send prayers and good vibes.

And occasionally some money to save face.

PS being aware of the speed the EU-turtles work, I suppose the last time EC officials talked with Greek officials on migration was …ehm… what? … 2-3 months ago?