Τhe original rock where Jesus Christ is traditionally believed to have been buried in Jerusalem has been exposed to the light of day for the first time in centuries.

According to an exclusive report by National Geographic, a partner in the project at the Church of the Holy Sepulchre, the original rock surface has been covered with marble slabs since at least 1555, and possibly longer. During a conservation project to shore up the shrine surrounding the tomb, a team from the National Technical University of Athens in Greece realized that they would need to access the substructure of the shrine to restore it, said Fredrik Hiebert, the archaeologist-in-residence at the National Geographic Society. 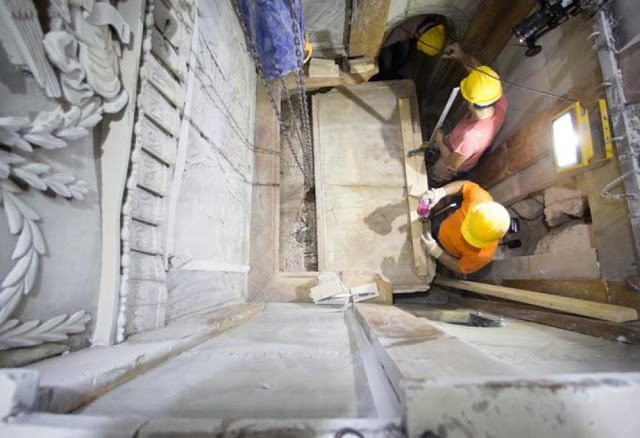 “The Greek conservation group are the first, as far as we know, to actually open this,” Hiebert told Live Science. “It’s pretty exceptional.”

The Holy Edicule itself sits within the Church of the Holy Sepulchre or Church of the Resurrection, which is a famed pilgrimage site and working monastery. It’s built directly over the cave where Jesus was said to be buried; another wing sits over the site where he is said to have been crucified. Three sects jointly manage the site: the Greek Orthodox Church, the Roman Catholic Church and the Armenian Orthodox Church. The three groups agreed in 1958 that conservation of the Edicule was necessary, but it’s taken nearly 50 years to agree on a method and to secure funding. According to National Geographic, the project will cost more than $4 million.

“There was a moment in which you could see on the faces of the important people of the church, a certain happiness that this has actually happened,” Hiebert said of the conservation.

According to Washington Post, the project “is the alpha and omega of restoration projects.”