US Elections: What Greeks and American Expats think about Hilary & Trump

It’s all about US Elections 2016. Given the position of USA as global leader it is obvious that all eyes are turned to the millions of American voters who will have to choose between an eccentric and rude Donald Trump and a “tough guy” named Hillary Clinton.

Of course, Greeks have a strong interest in the elections over the Atlantic as they will form also the American Foreign Policy in the next years. Greeks are highly  politicized and quite some consider that Clinton as a president and a former Foreign Minister would display some sensitivity towards the Greek issues like the relations with Turkey, Cyprus and the Greek debt. They consider Trump as unpredictable with no interest in Greek matters.

Yet, there are Greeks of the right-wing in favor of Trump apparently due to his approach to migrants.

However, it looks as if the general Greek approach is against both Hillary and Donald. 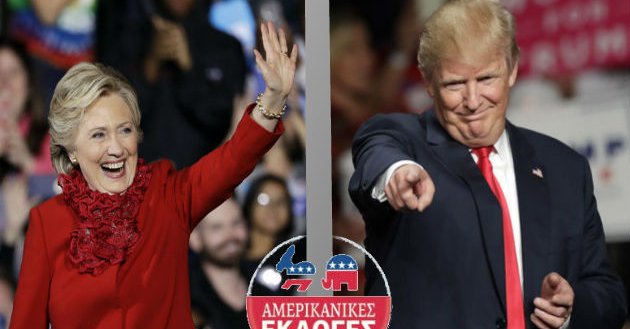 Characteristic is the title of progressive left-wing newspaper Efimerida ton Syntakton: “The USA between Scylla and Charybdis” – the two sea monsters from Odyssey.

I found it also interesting that a couple of people who favor Greece’s exit from the eurozone and the European Union support Trump!

But how do American expats look to the elections in their country?

Freelance journalist, Omaira Gill,  talked to several Americans living in Athens who watch the US Elections with particular interest.

The Americans in Athens have been talking, debating, encouraging friends to vote and arranging election parties as they wait for November 8. Now when I speak to them, they find themselves in a quiet period, the eye of the storm so speak, as they prepare for what comes next.

Marty Eisenstein is a guitar teacher from Boston who has been living in Athens since 1993 after following his wife here. He’s hoping Hillary Clinton wins, but “I don’t want to jinx it.”

The difference between how Greeks and Americans view these elections is pretty distinct, according to him. He was in the US a few weeks ago, and says that while in America, people might call Hillary Clinton dishonest, in Greece they call her “a monster, a warmonger. That’s the first thing many Greeks say.”

Stacey Harris-Papagioanou moved from Chicago to Greece in 1985 . She has  always cast her vote as an absentee. The moment she realized how important this was was during the Gore-Bush elections of 2000. “That election was so close. So not only did I make sure I was always registered to vote, but I made sure all my friends were too.”

Stacey is a very active member of Democrats Abroad, and she’s just spent the week calling everyone to make sure they are ready to vote.

There is a big buzz around this particular election. “Everyone is saying vote, whatever you do, go and vote, and a huge percentage have already taken part in early voting and absentee voting.”

[she recalls] when Greeks ask her “What’s wrong with the people in that country? How can anyone vote for Trump?”

“Trump, there’s a Greek word that describes him perfectly. He’s faflatas (someone who talks a lot but does little)! The difference between the candidates is night and day, and what that means for the rest of us will be night and day.” she says.

In stark contrast to the Greek way of doing things, Stacey says Americans have gone quiet and avoid political discussion as the election nears. “People don’t talk too much so as not to fight, unlike the Greeks that are very passionate and don’t mind telling their opinion to anyone. Americans a bit more reticent in that respect.”

Another American woman who has been living in Athens for ages says that she’s very concerned about the outcome of these elections. “I think it will be a tipping point if Trump wins.”

This for her is an election that’s turned the status quo on its head. “We are living in trying times and I believe that many of us who live in Greece are insecure on what the outcome will be. I’m very concerned. I believe that many US citizens will not exercise their right to vote during these elections.”

“When I am able to watch the elections with my fellow US citizens here in Greece, regardless of their affiliations, it’s more fun because we know why we are arguing. And yes we try to avoid prickly topics because we respect each other’s opinions. When watching with my Greek friends who have never lived or stepped foot in the US we argue for the sake of arguing.” she says.

PS Of course, Greeks do not need to visit foreign countries or read macroecomics in order to have an opinion and argument. Dialectic was born in Ancient Greece :p