The German-Austrian Plot: Australia solution – All refugees on a Greek island if EU Turkey deal fails

“If the EU Turkey deal collapses, the alternative is the Australasian solution: All refugees on a Greek island.” Gerald Knaus, an Austrian sociologist, is the architect of the Refugee agreement between the EU and Turkey and found of the think tank “European Stability Initiative (ESI)” with headquarters in Berlin.

In an interview to German magazine Der Spiegel, Knaus warns that the collapse of the EU Turkey deal would be “a disaster: the whole Balkan would destabilize.”

And therefore the alternative would be that all refugees and migrants would be transferred on an island as Australia does.

SPIEGEL ONLINE: What if the agreement failed?

Knaus: The only alternative is currently the Australian solution: Refugees arriving in Europe are to be held on an island, without right to apply for asylum in the EU. If Europe does this, it would be the end of the refugee convention, a disaster. Greece would be assigned to the role played by the Pacific island of Nauru for Australia. The borders in the Balkans would be militarized, a fragile region would be destabilized. The failure of the Deal would lead to an enormous boost for extreme parties throughout Europe. they would possibly win the elections in France, Austria and the Netherlands in 2017. (full interview Der Spiegel)

In other words, the think punk wants the sacrifice of Greece for the sake of stability in the Balkan and to avoid right-populists gain power in several EU countries, incl his own, Austria. Blinded by his own populism, the Austrian architect like all other architects of former empires in central Europe pretend to support democratic governance, while they turn a blind eye to other social-economic factors that boost the populism in EU. They are sheep of the same flock must be a cousin of this 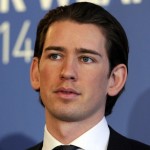 ESI was founded 1999 in Sarajevo, is among others financed by governments and foundations from Scandinavia and Ireland, the Rockefeller Foundation, the Robert Bosch Stiftung and the German Marshall Fund.

PS A very successful deal, by the way. Don’t tell anyone that it hardly works except to decrease of refugee flows to Europe. More than 62,000 people are stuck in Greece and the European partners managed to turn a European problem into a Greek problem.