A man close to far-rights and known for violent actions against refugees,migrants and journalists on the island of Chios was hired as a driver for Maarten Verwey, the Dutch ‘commissioner‘ responsible for the implementation of the EU Turkey deal.

The case was disclosed, when a local shot a picture outside the City Hall of Chios: Verwey steps out of the EU Commission van, the man, whose name is given with the initials M.M., stands next to him. 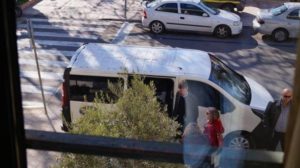 For local activists it was a matter of minutes to disclose the scandal ans the MM is very well known on the island. Against him there are two lawsuits pending: one by a journalist at local media astraparis.gr and by a male nurse at the local hospital. They claim that M.M. was the protagonist of all incidents against refugees and migrants in April, in June and in November.

Following the disclosure of his violent past, the European Commission reportedly fire the man.

Speaking to CNN Greece, EC sources rejected any responsibility for the hiring procedure and said that the man was hired via a company in Athens.

The Commission stated that the man was working as a driver and not as bodyguard or guide. The Commission added that it broke the cooperation with this specific company after the incident.

Sidenote: Maarten Verwey was originally assigned to lead the EU Task Force for Greece after Horst Reichenbach was sent home in September 2015. The EUTFG has/had the duty to help Greece with know-how in order to implement structural reforms. Apparently, the reforms have been concluded or continued to be a big failure on the side of EUTFG and so Verwey got a new job.

In February 2016, the EU Auditors found out that the EUTFG came, saw and delivered very few results. Unfortunately, no mainstream media investigates the issue that costs thousands of euros every month.