Greece’s low-pensioners have been waiting for the extra Christmas bonus announced by Prime Minister Alexis Tsipras for days. The magic, sparkling moment was set as December 22nd. The money started to flow into bank accounts already since Wednesday afternoon. Defying the icy-cold weather and Schaeuble’s objections, dozens of elderly rushed to ATMs to withdraw the unexpected  Christmas present together with the pension for January. 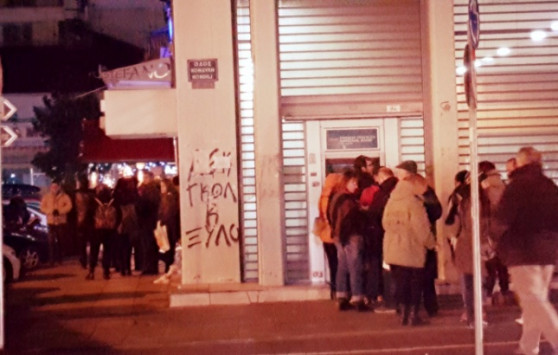 Trikala: Despite the low temperatures, pensioners formed long queues in  the evening.

Those unable to use cards stood rushed to the banks as early as possible in the morning and stood line for many hours before the doors opened.

Due to capital controls, the amount that can be withdrawn within two weeks is €840.

I asked a neighbor how will he spend the Christmas bonus. “I will have my bones warmed,” the 87-year-old answered with a bright smile. He has been living without heating for the last three years.