How to bring flowers and plants through the winter, avoid “sudden frost death”

I was so saddened the other day to see the plants of a friend who lives in Northern Greece to have died the sudden frost death after a bad weather front with polar air masses tortured the country for a week.

“After all these years my flowers did not survived,” she wrote.

Seeing all these flower and plants tops together it reminded me of the measure I got a couple of years ago, when a similar extended bad weather front with extreme low temperatures stroke Greece.

There are several professional tips on how to protect plants from cold, but who can move 30 pots inside his home, where to find mulch or where is this store with the huge plastic air bubble and lamination sheets?

I chose the simple way with tools and material always available in every household:

I relocated pots into groups and moved them away from the balcony edge and near to the house wall.

I cut and opened huge plastic garbage bags and then connected them with strapping tapes.

I loosely laid the bags sheet over the plants and strapped it on the wall with tapes. I paid attention that the sheet was reaching the floor and covered also the sides of the pots group. But also that it let the flowers and plants enough space underneath, enough space to breathe.

It looked ugly but it helped dozens of flowers and herbs and green plants to come through the frost of the winter.

On sunny days I would roll it up and let it down during the nights.

Once temperature rose above 5 C and the nights became frost-free I removed the protection covers.

Unfortunately I have no pictures from my experiment which I used to apply whenever … Siberia moved to Greece.

Now that the bad weather is gone – for now – I was almost about to trim one of the bougainvilleas and also cut and throw away some dried out branches of the small pomegranate tree, Hibiscus etc..

Then I heard an expert on Greek TV, urging not to trim plants at this time of the year – January 13th – as the winter is not gone and frost might return.

He also advised to refrain from fertilizing flowers and plants.

Once you do these, the plants will be irritated and thing they ought to bring new leaves in a month or so. But then it would still be …. middle of February. 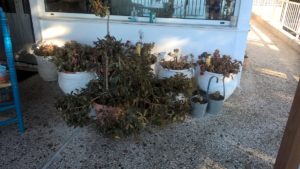 Of course, my tips refer to protection of flowers and plants in pots in the mild climate of low elevation in Greece.

I suppose, other measures would be needed in the Alps or other regions with wild climate.