Refugees and migrants at Elliniko camp launched a hunger strike on Sunday morning in order to protest appalling living conditions at the premises of the old Athens airport in the south of the Greek capital.

More than 200 refugees and immigrants started their hunger strike on Sunday morning. They demand the gradual relocation of those in need to apartments within the city and denounce the appalling hygienic conditions in the camp. They want warm water and school access for the children living in the camp.

They are determined to not allow the vehicle of the catering service to enter the camps. 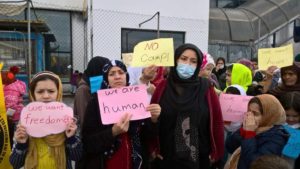 According to anti-racism and anti-fascism movement KEERFA that supports the protest,  the refugees and migrants in the camp complain about

-the lack of respect by those responsible to satisfy the refugees’ basic needs to ensure  human living.
–there is shortage of milk and diapers for infants and toddlers.

-the food coming from a catering company is unacceptable

-there is no hot water and no laundry

-there is no access to hospitals due to lack of translators

KEERFA stresses that the children in the camp need to have access to schools. the movement also criticizes that the only communication between asylum seekers and the government is via Skype.

The protesters want the immediate intervention of the Migration Minister.

Police squads have been deployed in the area to monitor that tension does not escalate. 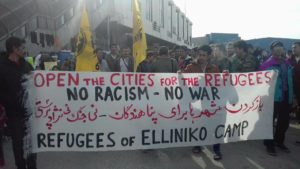 There are 1,300 people living in Hellinikon in three separate facilities.

The abandoned premises of the old airport were turned into a “temporary” camp in autumn 2015, when thousands of refugees and migrants started to flock to the mainland from the islands.

The Ellinikon camp was thought to temporarily host refugees from Afghanistan. The camp was supposed to be emptied in July 2016.

The Greek Migration Ministry seems unable to deal with the problem of Hellinikon camp, as the site of the former Athens airport has been privatized with the new owner to plan the construction of a luxury hotel resort and amusement and sports facilities at the Athens coastline,  the so-called Athens Riviera.