February 15, 2017 Economy Comments Off on IMF chief economist Blanchard warned in May 2010 Greece program was not going to work 317 Views

A report by Olivier Blanchard, a former economic at the International Monetary Fund, has been presented at a meeting organized by the Canadian think tank Centre for International Governance Innovation end of January. In this report,  dated 4. May 2010, then chief economist at the IMF, Olivier Blanchard was warning about the risks of the Greek rescue program, signed a couple of days ago between the IMF and Greece.

The report was addressing Poul Thomsen, who was in charge of the Greek program. 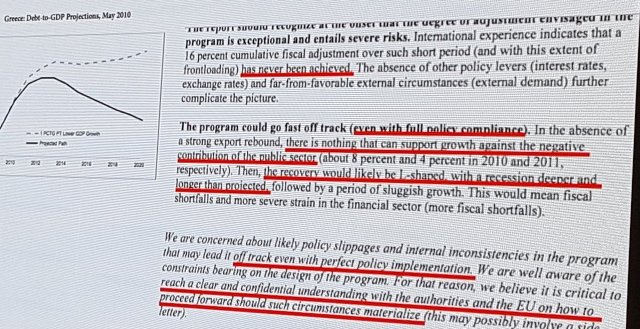 Economics Professor Paul Blustein, who presented the document at the think tank meeting reportedly summarized that “Olivier Blanchard warned that austerity can go wrong, even if the program would be fully implemented by the book.”

Managing Director of the IMF, Dominique Strauss-Kahn wanted a debt restructuring but then chief of European Central Bank, Jean-Claude Trichet rejected it.

I did not leak, but am not too unhappy that it did leak :). 7 years already, and still no clear/realistic plan. https://t.co/8mCzO3TYvL

No matter who leaked the report, Greeks experience each and every day that the first, the second and the third bailout do not work. And neither the fourth will do.

IMF bureaucrats and Schaeuble had and have more power than any chief economist in the Fund.