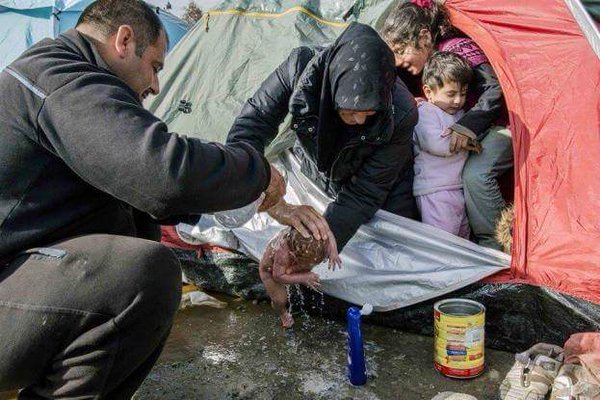 Great Inside Story: What went wrong with the Refugee Crisis in Greece

What went wrong with the Refugee Crisis in Greece? Two journalists, Daniel Howden (UK) and Apostolis Fotiadis (GR) investigated the issue and published their article under the title “The Refugee Archipelago: The Inside Story of What Went Wrong in Greece” in Refugees Deeply, an independent digital media project dedicated to covering the Refugee crisis.

The authors spoke with several of the 60,000 refugees stuck in Greece about their journey from a war-ridden country to Europe but also about their journeys inside Greece: from their arrival on the islands of the eastern Aegean Sea to the north of the country and the several camps.

Often the refugees’ ordeal stands in stark contrast to the international funding and energy expended to help people like them.

They took under the microscope also the funds and donations that flew for the ‘refugee cause’ as well as international nongovernmental organizations, local NGOs and government politicians and officials.

Howden and Fotiadis outline the deficiencies in of the humanitarian response which they describe as “The Most Expensive Humanitarian Response” in history.

The effect of that awakening was to tip the entire humanitarian complex toward Greece, sending resources tumbling out of the developing world into the European Union.

It prompted an unprecedented number of international volunteers to descend on the country, the U.N. refugee agency to declare an emergency inside the E.U., and the E.U. to deploy its own humanitarian response unit inside Europe for the first time.

In the process, it became the most expensive humanitarian response in history, according to several aid experts, when measured by the cost per beneficiary.

Exactly how much money has been spent in Greece by the European Union is much reported but little understood.

Refugees Deeply has calculated that $803 million has come into Greece since 2015, which includes all the funds actually allocated or spent, all significant bilateral funding and major sources of private donations.

“The biggest pots of money are controlled by the European Commission, the E.U.’s executive body, which oversees the Asylum Migration Integration Fund (AMIF) and the Internal Security Fund (ISF) which collectively had $541 million dedicated to Greek funding needs.”

However, the government in Greece was unable to absorb significant amounts of these funds, necessitating emergency assistance from the commission, channeled through other means.

Confusion over the true extent of spending has been exacerbated by inflated statements from the European Commissioner for Migration, Home Affairs and Citizenship, Dimitris Avramopoulos, who has regularly cited figures in excess of 1 billion euros ($1.06 billion). This amount apparently refers to all available and theoretical funds, not what has actually been allocated or spent.

“The $803 million total represents the most expensive humanitarian response in history.

On the basis that the money was spent on responding to all 1.03 million people who entered Greece since 2015, the cost per beneficiary would be $780 per refugee.

However, the bulk of these funds addressed the needs of those stranded in Greece after the closure of the borders, and on this basis the cost per beneficiary is $14,088.”

Officials from the E.U.’s humanitarian operations directorate, ECHO, believe the cost per beneficiary was unprecedented from their operations. And yet, one senior aid official estimated that as much as “$70 out of every $100 spent” had been wasted.

“The haunting image of Aylan Kurdi lying drowned on a Turkish beach on September 2, 2015, was shared more than 20 million times on social media. It prompted an immediate spike in Google searches related to Syria and an avalanche of private donations to charities working on refugee issues.

The Swedish Red Cross saw its daily donations leap 55-fold in the week after the image circulated.”

International nongovernmental organizations flocked to Greece, donations mounted, the effect was welcome and yet destabilizing at the same time. Experienced staff at local NGOs got poached by bigger new entrants that could afford far higher salaries.

“They [international organizations] were looking at how to show a presence in Greece. This led to some wasting the chance to spend constructively. Sometimes money can do more harm than good.”

A million-dollar facility built by an INGO on Lesvos was mothballed just seven months after it was set up.

Tension between national and international INGO staff complicated the effective.

On the example of UNHCR, the authors write that most Greeks earn less than 800 euros per month while UNHCR national staff are on contracts equivalent to more than double this amount. International UNHCR staff earn three times more than their local counterparts.

Fotini Rantsiou, a U.N. staff member who took a sabbatical from the organization to volunteer in her native Greece, says:

One issue that created difficulties was the left-wing attitude of the government towards the INGOs. SYRIZA approach is that they were colonialists and not humanitarian staff.

The article is lengthy and it is more than just worth reading.

It is a punch in the stomach. The Refugee Archipelago: The Inside Story of What Went Wrong in Greece.