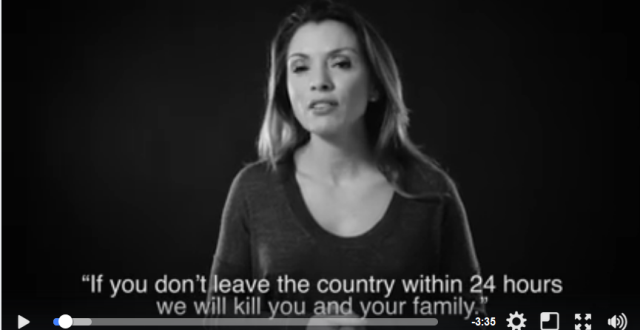 “Black Haired Pig” A powerful and shocking message against racism, sexism and xenophobia from a Greek-Swedish woman who has experienced first hand hate against migrants in Sweden ever since she moved there with her family at the age of six.

In a powerful video, Alexandra Pascalidou, 46, a prominent personality in Sweden, recounts how she experienced racism and sexism in the country she calls her home.

The 46-year-old journalist reckons an anonymous threat letter, the family received, when she was 9 years old.

“Black haired pig, if you don’t leave the country together with your family within 24 hours we will kill you.”

And all the threats she received: from ‘cutting her tongue’ to a ‘gang rape.’

A powerful and shocking message against racism and sexism, for democracy and pluralism and the courage to stand up and speak out.

Video: in English with EN subtitles

The video was uploaded on her Facebook page on March 9th. so far it has more than 470,000 views.

“We made a movie. If racism, sexism, and it’s. K Näthatet. And about the importance of having the courage to stand up and speak out. #Fight4democracy #Fightfordemocracy #freespeech #wordsareweapons

Paschalidou is columnist, freelance writer, television hostess, and human rights activist. She grew up in Sweden and aslo lives there with her fmaily and friends.

In the mid-1990s Pascalidou was, along with Michael Alonzo, Dogge Doggelito, and Cissi Elwin, a prominent figure in the Swedish part of Europarådet‘s anti-racism campaign “All Different All Equal”, known in Sweden under the working title “Youth Against Racism”(UMR).

PS Paschalidou is not the only Greek who has experienced racism in European countries. ‘Dark hair’ and ‘an accent in the language’ are enough for some brainless racists to stupidly think they have earned earn a better position in this wide world.