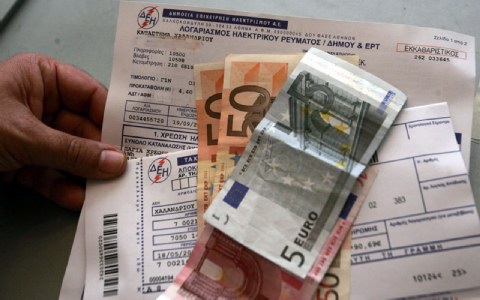 The cost for energy has not increased during the last year. Greek Public Power Company (PPC/DEH) did not dare to increase the price for electricity consumption amid the deep economic crisis in the country.

However, electricity bills have turned unpayable for thousands of households due to the additional fees and taxes. Greece has the most expensive electricity in Europe, a report found.

The increase between 2005 to 2015 has been 157%, the survey found, and this is the highest hike for energy across Europe.

According to a study conducted by Ipsos, London Economics, Deloitte for the European Commission:

According to the survey findings, more and more electricity consumers stated  that they have difficulties to pay their bills.

The survey covers the time period 2005-2015 and records significant deterioration in the rates when compared to previous surveys.

Paying electricity bills has developed to the greatest challenge for the Greek households. Bills are issued every two months and are based on estimations of previous consumption.

At the end of the fourth month, there comes the real bill that triggers brain and heart strokes. Especially at the end of the summer and winter the total 4-month bill is extremely high as one can hardly make it through the summer without air-conditioning. In addition, the heating problem in times of austerity and recession has forced many households to use again A/C in winter or electric devises to heat their apartments.

For example, our monthly bill is at 60 euro incl consumption at €30 and fees and taxes another €30. The 2-month bill is therefore some €120. What happens at the end of the 4. month is that the bill skyrockets to a total of 300-400 euros, especially after a long summer with extreme temperatures.

I can say we are ‘privileged’ in terms of electricity bills as we do not use additionally A/C and electric devices in winter. Fireplace and natural gas heating when temperatures are extremely low for the seasonal average. And we think twice, sometimes also three times, before we turn the solar panel on and get hot water supply on prolonged cloudy periods.

Last year, the PPC introduced a 15% discount to those subscribers who pay their bills on time.