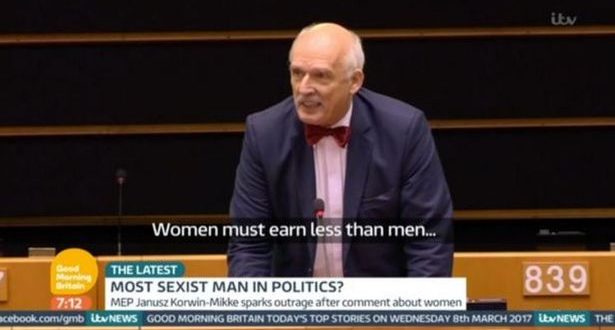 Polish MEP Janusz Korwin-Mikke has been suspended from the European Parliament ‘unprecedented’ sanctions. He will lose his daily allowance over sexist remarks he made in the chamber, Parliament President Antonio Tajani said Tuesday.

Korwin-Mikke, who’s Euroskeptic, pro-Putin and not attached to a political group, told MEPs on March 1, “Of course women must earn less than men because they are weaker, they are smaller, they are less intelligent and they must earn less.”

On Tuesday, Tajani said in a written statement he would not tolerate such behavior “from someone who is expected to discharge his duties as a representative of the peoples of Europe with due dignity.”

Korwin-Mikke will be suspended from parliamentary activities for 10 days, lose his daily allowance for 30 days, and be prohibited from representing the Parliament for a year.  The sanctions are “unprecedented in severity,” Tajani said. (politico.eu)

Janusz Ryszard Korwin-Mikke, 74, is a Polish politician and writer, and the founder of the right-wing libertarian and Eurosceptic political party Coalition for the Renewal of the Republic – Liberty and Hope.

The Polish MEP had been caught on camera telling shocked MEPs: “Women must earn less than men because they are weaker, smaller and less intelligent. They must earn less, that’s all.”

KTG reported about the case here and also urged readers to sign the Avaaz petition calling for sanctions against Korwin-Mikke.

The petition is still running and has reached so far: 940,996 signatures.