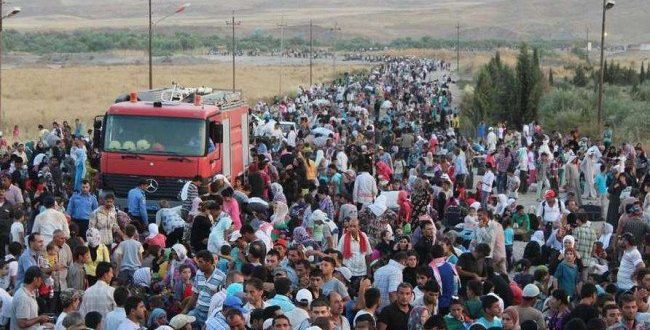 Turkish Interior Minister Süleyman Soylu has said Turkey could send 15,000 refugees and migrants to Europe to shock the Europeans. The threat follows  the recent diplomatic crisis between Ankara and Germany and the Netherlands that stemmed from the latter’s decision to bar Turkish ministers from staging rallies there.

“We have a readmission deal. I’m telling you Europe, do you have that courage? If you want, we’ll send the 15,000 refugees to you that we don’t send each month and blow your mind. You have to keep in mind that you can’t design a game in this region in spite of Turkey,” Soylu said at an event late on March 16, referring to a readmission deal between the European Union and Turkey to return migrants to Turkey who have illegally crossed the Aegean Sea to Greece.

As part of the agreement, Greek officials are obliged to return refugees trying to reach Western European countries via Greece and return them to Turkey.

Soylu said Germany and the Netherlands were trying to complete what they could not accomplish during the Gezi Park protests, the December 2013 graft probes – which targeted figures close to the government and resulted in lasting enmity between the Justice and Development Party (AKP) and the followers of the U.S.-based Islamic preacher Fethullah Gülen – and the July 2016 failed coup attempt, which is widely believed to have been masterminded by the Fethullahist Terrorist Organization (FETÖ).

“Who are the main ones trying to get things done? Germany and the Netherlands. Are the elections going to be held in Germany? Will the charter change in Germany or the Netherlands?” he said, referring to the April 16 referendum that will decide whether the current parliamentary system should be replaced by an executive presidency with vastly enhanced powers for President Recep Tayyip Erdoğan.

“This is our internal issue. What do you care? Why are you getting involved in it? Did you accept Turkey into the European Union? Did you provide support to Turkey in its fight against terrorism?” he said.

“There are games being played against Turkey in order to prevent it from becoming strong in the future,” Soylu also said.

Claiming that Turkey had been subjected to multilayered games for many years, Soylu said  FETÖ, the Islamic State of Iraq and the Levant (ISIL) and the outlawed Kurdistan Workers’ Party (PKK) were trying to destroy love and fraternity.

He also said the Turkish Republic was in its strongest period and that “some people can’t handle it,” adding that per capita income had increased during this period.

During his speech, Suleyman Soylu said the constitutional amendments would bring a system that “doesn’t produce words, but actions.”

He said the EU could “forget about” Turkey re-admitting failed asylum seekers who had reached Europe via Turkey, a key part of the agreement.

Erdogan also said the EU’s top court was leading a “crusade” against Islam and that the EU had broken its promise of granting visa-free travel to Turks.

“Now they say readmission. What readmission? Forget about it,” he said.

“You don’t let my minister into the Netherlands. You revoke the landing rights of my foreign minister. You prevent [us] holding meetings at the General Consulate building, which is my land. But after that you’d expect us to do this [re-admit migrants]. That’s not going to happen.”

On Wednesday Turkish Foreign Minister Mevlut Cavusoglu said Turkey could immediately stop implementing the agreement if it wanted to.

The Turkish government has escalated threats since the diplomatic row with the Netherlands broke out.

PS Turkey is politically so weak and a permanent victim of its own paranoia; it will never stop seeing ‘foreigners’ as enemies and therefore it will never be able to be a full member of the European Union – even if it wanted to. Period.