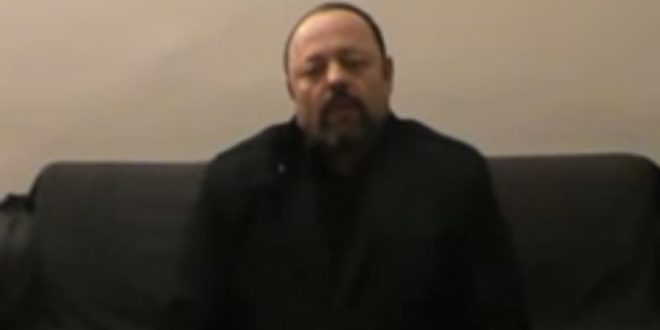 The man who would save Greece from its debt, the self-proclaimed trillionaire is now officially a fugitive. While police combs the area of Patras, Artemis Sorras uploaded a manifesto video in which he states that he will never surrender. He calls on his supporters to launch a protest demonstration outside the Greek Parliament if he gets arrested.

He describes his conviction as “judicial coup” and calls himself and his supporters “sovereign, indigenous Greek natives.”

He insists that he owns the $600 billion and tells his supporters that the money is not his “the money is yours.”

He also urges them to “storm journalists, politicians and policemen with law suits.”

In the video which is 21’22” long, uploaded on his YouTube account short before midnight Thursday and then posted on Facebook, Sorras wears black and sits on a black couch. Next to him on the left, is a distinguished symbol from ancient Greece, the double ax or Labrys that Sorras has been using as a prom during his speeches and meetings of his organization.

The manifesto has delirium features and is believed that the video was filmed by his wife.

Artemis Sorras and his wife were convicted in absentia to eight years imprisonment without parole fro embezzlement, after the couple’s best man and lawyer filed a lawsuit saying Sorras sold his luxury car and never gave him the money.

Police reportedly conducts research to his real estates and shops in Patras and elsewhere, as well as mobile phones, the internet, his social media accounts and the electronic ‘fingerprint’ of the video.

Investigation at airports seems to have shown that Sorras did not flee abroad, at least not per airplane.

Police reportedly suspects, that Artemis Sorras, possibly also his wife, may have fled by ferry boat to a nearby destination like Italy and from there to Latin America.

Greek television networks claim that he may have prepared his escape since  last January. However, there are also claims that his wife was shortly seen in the court on Friday and fled after it became clear that the judges would not extend the trial.

More on Sorras and his alleged $600 billion