The online questionnaire uploaded by the Youth organization of ruling left-wing  SYRIZA is theoretically a sociological research, an attempt to gather the opinion of the basic of the youth organization. However, several questions are unconventional and even rename the criminal offense of “theft” into “activism”. The questionnaire triggered an outrage not only among the opposition parties but also within the coalition government partner, Independent Greeks (ANEL).

The respondents are asked about thefts in supermarkets aiming to distribute food to the vulnerable, participation in squats of public buildings, violent protests, whether they deal violently with racist groups.

The admittedly unconventional questions triggered an outrage among the opposition parties. 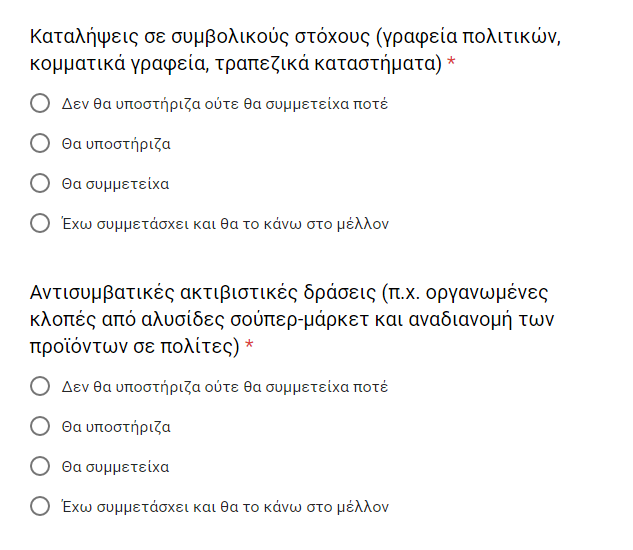 “Are you involved in organized theft from supermarket chains and distribution of products to civilians?”

The question runs under the name “unconventional activism actions”

Other questions ask respondents whether they would support/participate or not

Other questions refer to “legalization of cannabis”, “abolishment of compulsory military service”,  :legislation for parenting by homosexual couples”.

The questionnaire has a total of   questions, a respondent cannot proceed if one question left unanswered.

Respondents can determine their ideology as

However they cannot check multiple options.

The questionnaire was published ahead of the first Congress of the SYRIZA Youth “Collegiality – Struggle – Solidarity” scheduled form 6-9 April 2017.

Main opposition party New Democracy said in a statement “Under SYRIZA, the impossible and illegal turn normal,” and urged Prime Minister Alexis Tsipras to intervene and stop “this derailing.”

the Youth of SYRIZA replied to ND speaking of “mud throwing, lies, disinformation and misinterpretation” and accusing ND of having no idea about scientific research.

PASOK Youth said “the activism of theft is SYRIZA’s dream.”

MP Dimitris Kammenos (ANEL) “Is it possible to talk about activism of theft and squats, of violent protests? Is it possible to call criminal offense activism?” ( cnngreece, protothema, in.gr).

There have been indeed one or two raids in supermarkets in the past.

PS I have no idea whether the questionnaire is just about activism and not also about other crucial questions of Greece’s youth like unemployment, euro, politics, economy etc.

I assume, it’s just about activism though.