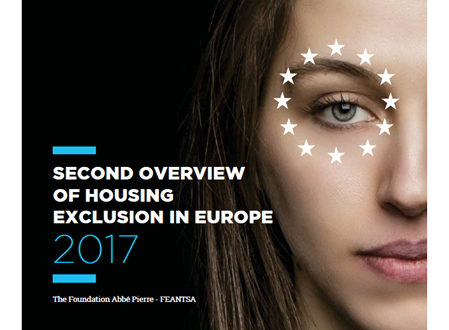 Households in Greece spend a greater portion of their income on housing cost  than those in any other country of the European Union country. A survey conducted  by the European Federation of National Organizations Working with the Homeless (FEANTSA) has found. At the same time, homelessness and housing problems reach crisis point in all EU countries, except for Finland.

It is considered that when this expenditure exceeds 40 percent of income it is excessive and puts households at financial risk.

In euro terms, households spend an average of 440 euros per month on needs related to housing, which is 25 euros less than in 2009, However,  the drop in incomes in the meantime has been far greater than that.

According to a press release issued by FEANTSA, , housing exclusion and
homelessness are emerging as huge challenges for the EU.

Using the latest available Eurostat/EU-SILC data, the Second Overview of Housing Exclusion in Europe 2017  highlights a housing exclusion
state of emergency in Europe.

This is an issue which affects all European countries, not just the ones struggling due to the financial crisis.

Countries such as the UK and the Netherlands are among those whose situation
has worsened since the First Overview of Housing Exclusion in Europe.

Indeed, the UK now ranks 20th out of 28, with a broken housing market out of reach for poor and middle-class people.

In Germany, 16% of people spend more than 40% of their income on housing (known as housing cost overburden) – a situation second only to Greece.

In Romania, 1 out of 2 people live in overcrowded conditions.

In Greece all indicators are set to red with 95% of poor Greeks in housing cost overburden.

In all EU countries, young people are more vulnerable to prohibitive housing costs, overcrowding and severe housing deprivation than the rest of the population.

For poor young people across Europe, the situation is becoming unbearable, with 65% in Germany, 78% in Denmark and 58% in the UK spending more than 40% of their disposable income on housing.

In general, people living below the poverty threshold are increasingly marginalised by a private rental market than feeds off a systemic lack of affordable housing.

The number of 1 Poor categorised here as earning less than 60% of median income.

Evictions have increased dramatically in the aftermath of the 2008 subprime mortgage crisis with an apocalyptic situation in Greece.

In all European countries, non-EU nationals are far more likely to face housing cost overburden and overcrowding than EU nationals.

Homelessness is rising in all countries, except Finland, and major cities such as London, Paris, Brussels, Dublin, Vienna, Athens, Warsaw and Barcelona are under strain.

Since 2013, Warsaw saw an increase of 37% of people sleeping rough or in emergency shelters, and perhaps most shockingly of all,

The Second Overview of Housing Exclusion in Europe 2017 published by FEANTSA and the Fondation Abbé Pierre reveals alarming evidence of rising
homelessness across the majority of the European Union, as well as a dramatic picture of severe housing deprivation in almost all EU countries.

Now, more than ever, is the time for Juncker’s Commission to bridge the disconnect with its most vulnerable citizens and make full effective use of the policy instruments at its disposal.

What can be done at the European level?

The tools required to deal with the challenges of housing exclusion and , clear European incentives would give greater momentum to these proven solutions that deserve to be prioritised.

As the EU’s post-2020 Agenda is drafted, it is time for the Juncker Commission to prove it is not just all talk and no action.

The EU and the Member States can and should act to enforce social rights.