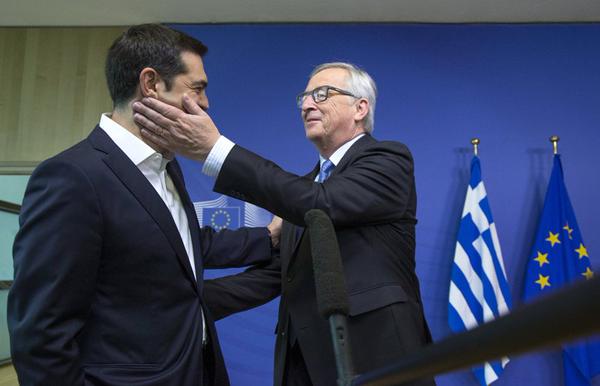 Juncker replies to Tsipras: There is no “one-size-fit-all” in EU social acquis

European Commission President Jean-Claude Juncker called for a rapid conclusion of  the ongoing negotiations between Athens and the creditors  and of the second review of the current Greek program.  In a letter to Greek Prime Minister Alexis Tsipras, Juncker said: There is not one size fits all in the social acquis of the European Union.

“I have read the letter of the Prime Minister with great attention.

I can sympathise with the European spirit and with the plea for a return to normality after so many efforts by the Greek people. For me, there is no doubt that the EU social acquis applies to Greece as to any other EU Member State.

This is why I went on record with Prime Minister Tsipras already in May 2015 to state my support for fair and effective collective bargaining systems. This is why the Commission conducted a social impact assessment of the new programme before it was finalised in August 2015. And this is why, when it comes to labour market reforms, we pushed for a group of independent experts to make recommendations in the light of European and international best practices.

These experts issued their report last autumn and we stand behind their recommendations. Some of them are straightforward when it comes to applying the law. Others are more open when it comes to practical arrangements or ways of working. This is because, as the report rightly recalls, and we all know it, there is no “one-size-fit-all” in the social acquis or in the economic textbook when it comes to organising collective bargaining. Let me add that there is no place for ideology either.

From experience, and I have experts around the table, what matters most is not how the system is conceived on paper, but what the social partners make of it, through their ability to engage jointly, autonomously and together with public authorities.

These issues are part of the discussion on the second review of the programme for Greece and I agree that it is in everyone’s interest to conclude it rapidly. We are not far away: significant progress has been made over the last weeks and again over the last days until late last night.

I believe we should reach a deal which respects the commitments made on all sides at the start of the programme: the commitments of the Greek authorities not to reverse reforms agreed in the past to preserve competitiveness. The commitment of the creditors to give Greece the desired and necessary room for manœuvre to build its own future. All this in respect of the social acquis, of which we are a guardian.

I invite everyone to pursue their work in this spirit.”

Just hours before the EU Summit to celebrate 60 years from the Treaty of Rome and the Rome Declaration, Greek Prime Minister Alexis Tsipras sent a letter to European commission president Jean-Claude Juncker and European Council president Donald Tusk.  Tsipras askeds if the European law (acquis) is valid for all EU member states except Greece.

The Greek Prime Minister calls on the presidents of the highest EU institutions to take clear position on Greece and the European “acquis” regarding labor and social rights. The EU acquis are the accumulated legislation, legal acts, and court decisions which constitute the body of European Union law.

I suppose, EU Council President Donald Tusk is still trying to translate Tsipras’ letter as it was in Greek,

PS nice. Now Greece can sign the Rome Declaration and we can all celebrate 60 years European Union….