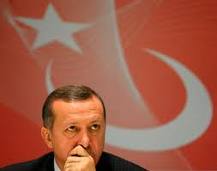 Erdogan: Turkey may have Brexit-like Referendum on EU

March 25, 2017 Politics, World Comments Off on Erdogan: Turkey may have Brexit-like Referendum on EU 128 Views

President Recep Tayyip Erdogan said that Turkey may have a Brexit-style referendum on whether to continue European Union membership process or not after the April 16 constitutional referendum.

Speaking during the Turkish-British Tatlidil Forum in southern Antalya province, Erdogan said Turkey would likely review its ties with the bloc after its April 16 referendum on sweeping constitutional changes.

“You [Britain] have made a decision with Brexit, there may be different things after April 16.”

“We have a referendum on April 16. After it, we may hold a Brexit-like referendum on the [EU] negotiations. No matter what our nation decides, we will obey it,” Erdogan said.

Turkey applied for membership of the EU in 1987; accession talks began in 2005.

However, negotiations hit a stalemate in 2007 because of Turkey’s position on the Cyprus issue. Also, the German and French governments opposed the country’s full EU membership.

“Here is the Swiss Parliament, extreme terrorist organizations put my photo there – pay attention, it is the parliament – with a gun on my head.”

“There is no such an understanding. How does something like that happen? It is Switzerland. There are many like it,” Erdogan said.

On Saturday, supporters of the terrorist PKK, DHKP-C, YPG took part in a rally in front of the Federal Parliament building, located in Parliament Square in Bern, targeting Turkey and President Erdogan.

The Swiss police did not intervene against the banner, which had a photo of Erdogan, a gun pointed to his head and said “Kill Erdogan” on it.

The Swiss Green Party also supported the rally, which was attended by approximately 250 PKK supporters who shouted slogans against Turkey and Erdogan.

Erdogan said the European politicians should leave their “bad manners” towards Turkey as soon as possible.

“It must be known that there is a limit to [Turkey’s] patience with the attitude that European countries show us,” Erdogan added. (full story AnadolyNewsAgency)