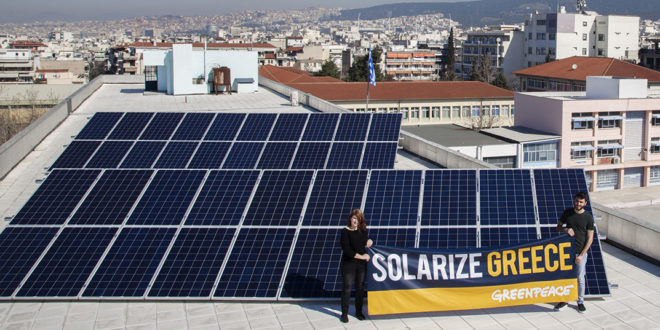 Greece’s first virtual net-metering PV system is installed on the rooftop of a school in Thessaloniki, the country’s second biggest city. The system is funded by Greenpeace Greece but is not yet connected to the grid, as it is waiting for the ministry to pass a new law.

Net-metering (or net energy metering, NEM) allows consumers who generate some or all of their own electricity to use that electricity anytime, instead of when it is generated. This is particularly important with wind and solar, which are non-dispatchable. Monthly net metering allows consumers to use solar power generated during the day at night, or wind from a windy day later in the month.

Greenpeace Greece, the Greek arm of the international environmental organization, funded a 10 KW solar PV system in the city of Thessaloniki, in Northern Greece.

The system is installed on the rooftop of a local high school and aims to be the country’s inaugural virtual net-metering system. Generated electricity will cover the needs of a hostel for women and children who are victims of violence. The hostel is managed by Thessaloniki’s city council and is located far from the PV installation at the high school.

Such an arrangement is possible through what is commonly known as virtual net-metering. Greece has legislated net-metering since December 2014, while the country’s new renewable energy law approved last summer allows virtual net-metering, albeit only for installations developed by city and regional councils, schools, universities, farmers and farming associations.

The law approved by the legislature last summer requires the energy minister to specify the technical details for the virtual net-metering scheme separately. Such details do not need to be reapproved by Greece’s Parliament. A ministerial decision is enough and will also comprise a Greek law.

The PV system in Thessaloniki will connect to the grid when the ministry of environment and energy approves the technical details of the virtual net-metering scheme, said Greenpeace Greece, calling on the ministry to do so as soon as possible so that similar installations can be developed in the country.

Thessaloniki’s mayor Yiannis Boutaris said it is important that the ministry acts before the summer, so that the new PV system can make use of Greece’s excellent solar irradiation in the warm months. What is important with virtual net-metering, added the mayor, is that it allows the city council to invest the money saved to develop similar projects and support our social work.

Thessaloniki is a pioneer in installing solar PV on its schools’ rooftops. And Greenpeace Greece has also run before the ‘Solarization of Greece’ campaign aiming to promote net-metering PV installations.