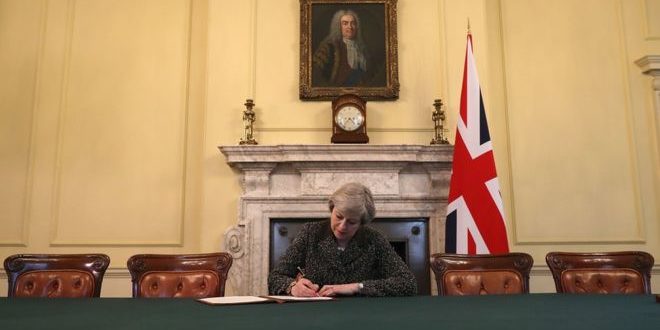 Prime Minister Theresa May has signed the letter that will formally begin the UK’s departure from the European Union. Triggering Article 50 on Brexit is not welcome by everyone in UK. Please, take the poll for Brexit and EU.

Giving official notice under Article 50 of the Lisbon Treaty, it will be delivered to European Council president Donald Tusk later today.

May’s letter will be delivered at 12:20 BST on Wednesday by the British ambassador to the EU, Sir Tim Barrow.

Donald Tusk has promised to reply within 48 hours and a summit of the 27 other EU leaders has been scheduled for 29 April.

The top politicians will decide on the guidelines EU Commission negotiator Michel Barnier and his task force are given for the two-year-long talks.

In a statement in the Commons, the prime minister will then tell MPs this marks “the moment for the country to come together”.

It follows June’s referendum which resulted in a vote to leave the EU.

Mrs May’s letter will be delivered at 12:20 BST on Wednesday by the British ambassador to the EU, Sir Tim Barrow.

The prime minister, who chaired an hour long cabinet meeting earlier, is set to make a statement to MPs confirming the countdown to the UK’s departure from the EU is under way.

She will promise to “represent every person in the whole United Kingdom” during the negotiations – including EU nationals, whose status after Brexit has yet to be settled.

“It is my fierce determination to get the right deal for every single person in this country,” she will say.

“For, as we face the opportunities ahead of us on this momentous journey, our shared values, interests and ambitions can – and must – bring us together.”

May has revealed that she will not seek to maintain the UK’s full access of the EU’s single-market and seek to barter a “unique” customs relationship with bloc, which will allow Britain to make its own free trade agreements – something that the UK, as a member of the EU, is not currently able to do.

As Article 50 is triggered, international media reveal that the UK is talking to 15 countries about a post-Brexit trade deal.

Negotiations are expected to take two years. During this time, UK has the right to revoke its Brexit decision.

On the day that Article 50 is triggered, please RT to show support for our amazing staff from the EU and the rest of the world #brexitday pic.twitter.com/ZXlSmCqfGG

While millions of Britons are enthusiastic about the Brexit, others feels desperate.

What do you think? I have two polls: the first is for UK nationals and Expats, the second one for non-UK nationals. Polls number 3 and 4 are for eveyrone.

1. Poll for UK Nationals and Expats

3. Poll for everyone: Greece

4. Poll for everyone: EU

Great thanks for your time.