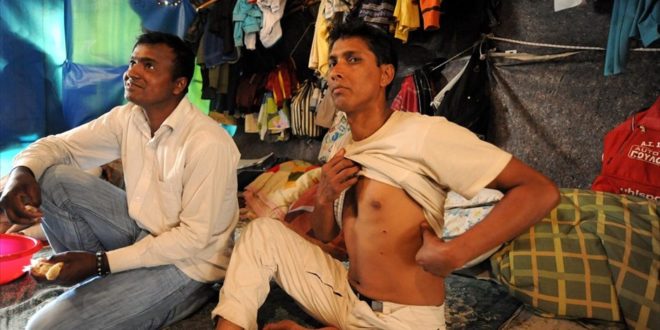 March 30, 2017 Uncategorized Comments Off on ECHR rules Greece to pay €12K-€16K to each of 42 strawberry pickers in Manolada shooting 861 Views

A group of strawberry pickers from Bangladesh has won a case against Greece at Europe’s highest human rights court. They were shot at by employer’s foremen for demanding unpaid wages after they had worked for 5 month sin Manolada, Peloponnese. The Council of Europe’s Court of Human Rights ruled Thursday in favor of 42 Bangladeshi nationals, and ordered the Greek state to pay them damages of 12,000-16,000 euros each for having “failed in its obligations to prevent the situation of human trafficking, to protect the victims.”  A Greek court had ruled the workers should receive 42 euros each in compensation.

The ECHR  also ruled in their favor 4,363 euros to cover trial expenses.

The 2013 incident occurred near the southern Greek town of Manolada, 260 kilometers (160 miles) west of Athens, when more than 20 migrant strawberry pickers were shot and wounded by foremen wielding shotguns after demanding delayed pay.

At least twenty-eight strawberry field workers from Bangladesh were transferred to hospital with light injuries on April 17, 2013 afternoon after being shot by the foremen of their employer.

The incident occurred  at 6 p.m. Wednesday on the 41st kilometer of the highway between Patras and Pyrgos in Peloponnese. A large group of immigrant workers mainly from Bangladesh went to meet with the foremen of their Greek employer, demanding outstanding wages for the last six months.

However, strawberry pickers and foremen had a dispute, they wrangled with each other, at one point the three Greek foremen took their rifles and started blindly shooting into the crowd. The workers started to ran in panic, while they were being shot on the back and other parts of their bodies.

According to local media that spoke with some of the injured, the group consisted of 80 immigrant workers. Four or five foremen told them there would be no payment and they should return to their work. When the dispute started, three foremen opened fire. (more on KTG report April 17, 2013) The migrants who had no working permission were hired to work from October 2012 to February 2013. They were promised €22 daily pay for seven hours of work and €3 per overtime hour. they worked daily form 7 am to 7 pm under the supervision of the armed foremen. They lived in makeshift tens without toilets and running water.

The court in Strasbourg ruled that the situation of the applicants revealed human trafficking and forced labor, given the fact that exploitation through labor is “one of aspect of trafficking.”

From the ECHR pdf shared by AP

The Associated Press reports today, four years, later that the European case was launched after a Greek court convicted two of the shooting suspects but they were released pending their appeal.

Morsed Chowdury, the lead applicant in the European case, and the human rights watchdog Amnesty International welcomed the decision taken by the court in Strasbourg, France.

“We are very pleased and excited by today’s judgment. The Greek court’s acquittal of the farmers for the crime of forced labor was a great disappointment to us,” Chowdury said.

“We hope that the Greek government will learn from our experiences and recognize our important role in the Greek economy.”

The shootings were widely publicized, highlighting the frequent mistreatment of migrant workers in Greek farming jobs.

“Today’s judgment is an important vindication for them and their families and will hopefully help prevent future abuse,” Amnesty International’s Gauri van Gulik told the AP.

“Amnesty has met and interviewed the migrant workers about their exploitation in 2013 just after the incident and saw for ourselves their living conditions.”

It was not the only incident with maltreatment of migrant workers in Manolada.

The boycott “Blood Strawberries” was launched.

Average Greeks indeed joined the protest action against the sweet bloody fruit in the following days and weeks and called them “the Strawberries of Shame.”