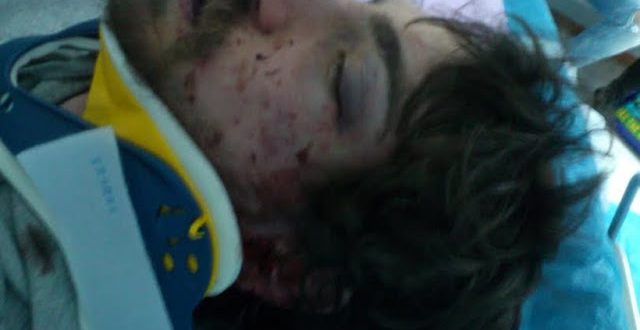 Police arrested a man, the owner of the cafeteria where members of Golden Dawn were hanging out before they brutally beat a student on Friday. According to media, the arrested man is hired by the far right party for multiple job positions, one of them being at the office of GD leader in the Greek Parliament.

State Athens News Agency reports that the man arrested Saturday morning  “is one of the attackers who brutally beat and seriously wounded the 24-year-old student” on Friday.

The 42-year-old man is owner of a cafe in Ambelokipoi district of Athens, a cafe where GD members hang out.

The man denies having participated in the beating. However, he was arrested on the basis of a specific testimony. He is expected to be taken to prosecutor within the 48-hour in flagrant delict procedure.

Daily Kathimerini refers to the arrested man as “Golden Dawn official” who works in the GD office that was attacked on Friday by a group armed with sledgehammer. “He has worked in the past at the office of GD leader Nikos Michaloliakos in the Greek Parliament,” the daily notes. Other media  note that he has been been working in the Parliament since 31 Dec 2012.

Some media stress that the 42-year-old is in charge of security at the GD branch office.

The arrest confirms initial reports that the student was beaten by Golden Dawn members.

The student of Fine Arts was heavily beaten and seriously injured just hours after unknown assailants attacked a branch of the party in Athens on Friday morning. Media speak of retaliation attack.

The student was on his way home when he was attacked. According to initially reports, he was attacked when he passed by a cafeteria where Golden Dawn members are hanging out.

Citing the student’s testimony to police, bloko.gr  notes that the student was initially verbally attacked by GD members when he took a picture of the smashed windows of the GD office.

“He didn’t pay any notice and kept walking. A short while later, a motorcycle with three passengers on and a four man running next to it came close to the student. They first started swearing at him, later brutally beat him,” bloko reports.

Investigation largely depends also on eye-witnesses’ testimonies as the attacked took place at 3 o’ clock in the afternoon in an area with lots of residents and passersby.

Police and security continue the investigation to identify and arrest the remaining suspects. It is estimated that five more people were involved in the attack.

The attackers face felony charges as they also took the student’s bag.