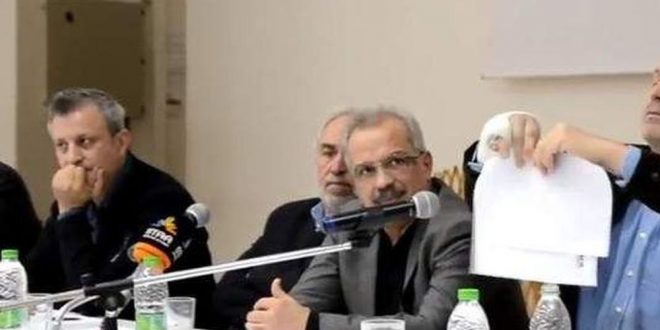 In an outburst of xenophobia, angry residents reacted very strong against government plans to open an accommodation center for refugees in their area, in Stylida, eastern Fthiotida, Central Greece. The atmosphere during a meeting at the municipality building ‘was explosive,’ local media report.

Mayor Apostolos Gletzos had invited residents to brief them about the plans to turn the former military camp Karavomylos into an accommodation center for refugees.

The Mayor said that the situation would be under control, when the refugees would be hosted in the former camp premises in Karavomylos. “Otherwise,  he refugees can be dispersed within the urban fabric, renting houses or hotels in the area,” Gletzos said.

But residents were adamant against the plan. They demanded a referendum.

The Mayor came under fire, several shouted at him to just ‘go away’.

The residents’ argument was the usual staff expressed by a certain ideological, a far right approach. some shouted “We should drown them in the Aegean.”

According to LamiaReport.gr, the local authorities accepted residents’ demands for a referendum.

It is not clear when Stylida municipality will hold the the referendum and if the results will have any effect in the decisions of the central government, the Migration and the Defense ministry.

Much to my knowledge, municipalities cannot change decisions of the central government through referenda. However, I may be also wrong.

At the same time, there is no legal framework enforcing municipalities to accept accommodation centers for refugees within the boundaries. However, municipalities are there to help with the refugee crisis.

Greece hosts more than 62,000 people. Some 10,000 are in accommodation centers and hot spots on the islands of the Eastern Aegean Sea.